For those who have been separated from loved ones on the other side of the world, the UAE capital might be the perfect midway point for a sun-drenched reunion. Writer Emily McAuliffe discovers the best things to do in Abu Dhabi.

Why hadn’t I stopped here before? Having flown across the world from Australia on many occasions, I’d always made the trip, bleary-eyed, in one or two hops, intent on reaching my destination as quickly as possible. This usually meant a nip to the Middle East, oblivious to the beauty beyond the airport.

Case in point: Abu Dhabi. A city that’s not just a stopover, but, as I quickly discovered, a destination in its own right. It’s home to great food, culture, sun, soft sand and turquoise water, swirling around its 200 islands.

Ruler of the Emirate of Abu Dhabi from 1966 and president of the UAE upon its formation in 1971, Sheikh Zayed’s extraordinary impact on the region is remembered through his eponymous Sheikh Zayed Grand Mosque. Grand is not an understatement. Standing 100 metres at its highest point, it’s one of the largest mosques in the world. And an unmissable addition on any list of things to do in Abu Dhabi.

Like all women entering the mosque, I cover from head to toe. As a note, mosques are the only place in the city where women need to cover their hair, wrists and ankles. I wander through a corridor of tall, white-marble pillars decorated with jasper and amethyst. To my left, the central courtyard is so shiny it reflects the minarets, like a shallow pool of water.

The mosque is just one example of Abu Dhabi’s spectacular architecture. On Saadiyat Island – the city’s cultural precinct – the Louvre Abu Dhabi showcases the work of Pritzker prize-winning architect Jean Nouvel. The low, domed building has a permanent exhibition that cleverly combines the history of civilisations across the world. In addition, temporary exhibitions display art loaned from French museums including Musée du Louvre, Musée d’Orsay and Centre Pompidou.

Like the grand mosque, the Louvre is best visited at dusk. The sun seems to burn bigger and brighter in the UAE. Before entering the gallery, I stop to watch gravity gently pull the glowing orange orb into the water. Behind a soft haze, the sky fades from dusty pink to deep purple, resembling a pastel painting. It’s as though I’m surrounded by art, inside and out.

Abu Dhabi’s glitzy inner-city skyline is impressive, but a visit to Emirates Palace is where I appreciate the depth of the city’s opulence. Turning into the palace’s long driveway, the earthy-coloured Arabesque-style building – which cost US$3 billion to build – sprawls before me. The private marina and 1.3 kilometres of private beach hide behind. Many of Abu Dhabi’s hotels have access to a private, white-sand beach, including the Park Hyatt on Saadiyat Island.

Inside, the hotel practically glows. Chandeliers made from Swarovski crystals gleam overhead. Meanwhile, 24-carat gold – 34 tonnes of it, to be precise – decorate the ceilings, pillars and other ornaments. For extra opulence, a 24-carat gold facial is also on offer at the spa.

Later, I criss-cross the hotel, padding across thick carpet from Persia to one of the palace’s many restaurants. At Vendôme, I sit down to a buffet of traditional food. Here, dips and flatbread, tabouleh, juicy meat and sticky sweets are the order of the day.

Trending
11 incredible winter experiences you can have around the world

Second to dining inside a palace is dining under a desert moon. On my final night, I’m chauffeured to Al Khatim desert, a 90-minute drive east of the city. Despite its plentiful turquoise beaches, Abu Dhabi is best known for its vast desert. Here, sand shifts and ripples in the hot wind, creating an undulating and ever-changing landscape. Throughout my four-day trip, I ask locals what they love most about their home. The answer is unanimous: the desert. And of all the unmissable things to do in Abu Dhabi? Dune bashing, of course.

Today, my Landcruiser isn’t just a form of transportation; it’s part of the fun. A group of camels lazily watch as we pull up alongside a row of four-wheel drives. We quickly jump out to haul ourselves up a steep, sandy peak. Before us, we glimpse dunes rolling to infinity. We don’t have long to wait before our guide signals us back to the car. Moments later, we’re careening across the dunes at high speed, sliding sideways down slopes and hurtling nose-first into sandy valleys.

Our driver expertly corrects the vehicle at the last second and returns us to a barbecue area. Here, low white-clothed tables sit on red rugs in the sand. We dine surrounded by the silence of the desert. It’s as though we’re in the middle of nowhere, when really we’re in the middle of the world. Could there be a better halfway point than this?

A quick guide to the birth of Abu Dhabi

Abu Dhabi is the capital of the United Arab Emirates. Sitting on an archipelago in the Persian Gulf, it connects to the mainland by a bridge. The city was transformed from a relatively unknown town into a sophisticated metropolis, thanks to an oil discovery in 1958.

Today, this cosmopolitan city is UAE’s cultural heart. Filled with museums, architecture, culture and award-winning five-star properties, Abu Dhabi is so much more than just a layover destination. Make it the meeting point for your next trip and discover the best things to do in Abu Dhabi for yourself.

This article was created in partnership with Abu Dhabi Tourism. 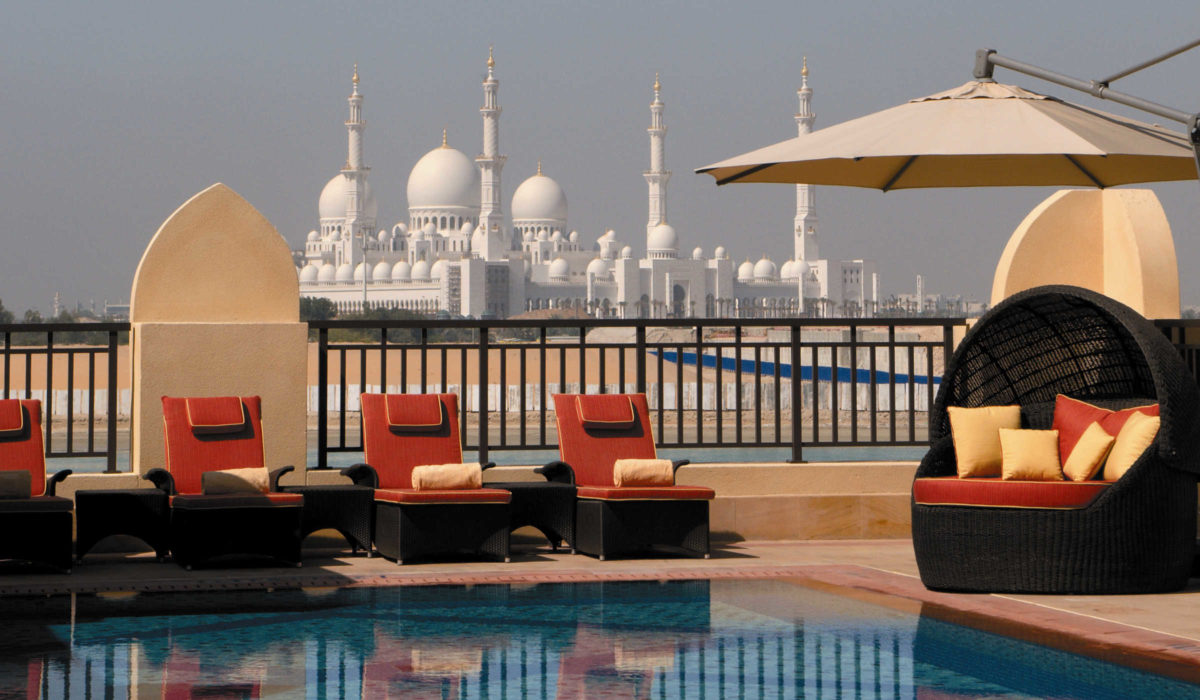