Beyond Mykonos and Santorini: the other islands of the Cyclades

Many of us have been lucky enough to visit those jewels of the Aegean Sea, Mykonos and Santorini. Glorious islands both, but sometimes so overwhelming and just too beautiful, not forgetting that they also attract more than their fair share of visitors. Occasionally our taste leans towards something a little less dramatic, a little less ‘full-on’, while still providing that same intense Greek island flavour, the Hellenic essence.

Other islands in the Cycladic chain encircling the sacred island of Delos certainly still offer the traveller a wonderful experience. To the southeast lie Folegandros, Milos, Kimolos, Sifnos, Serifos and Paros.

We decided that our first proper stop would be Milos. This picture-postcard isle is wonderfully romantic, with the remarkable sunsets at Klima a match for anything that visitors ascending to Oia on Santorini every evening might witness.

Klima is a simple row of fishermen’s huts sporting just one taverna serving the obligatory dishes of Horiatiki (Greek salad) and fresh fish. Besides this, it also happens to boast some interesting catacombs and a simply beautiful first-century odeon perched above it among the ruins of the ancient citadel, which was once the capital of the island and its major port. 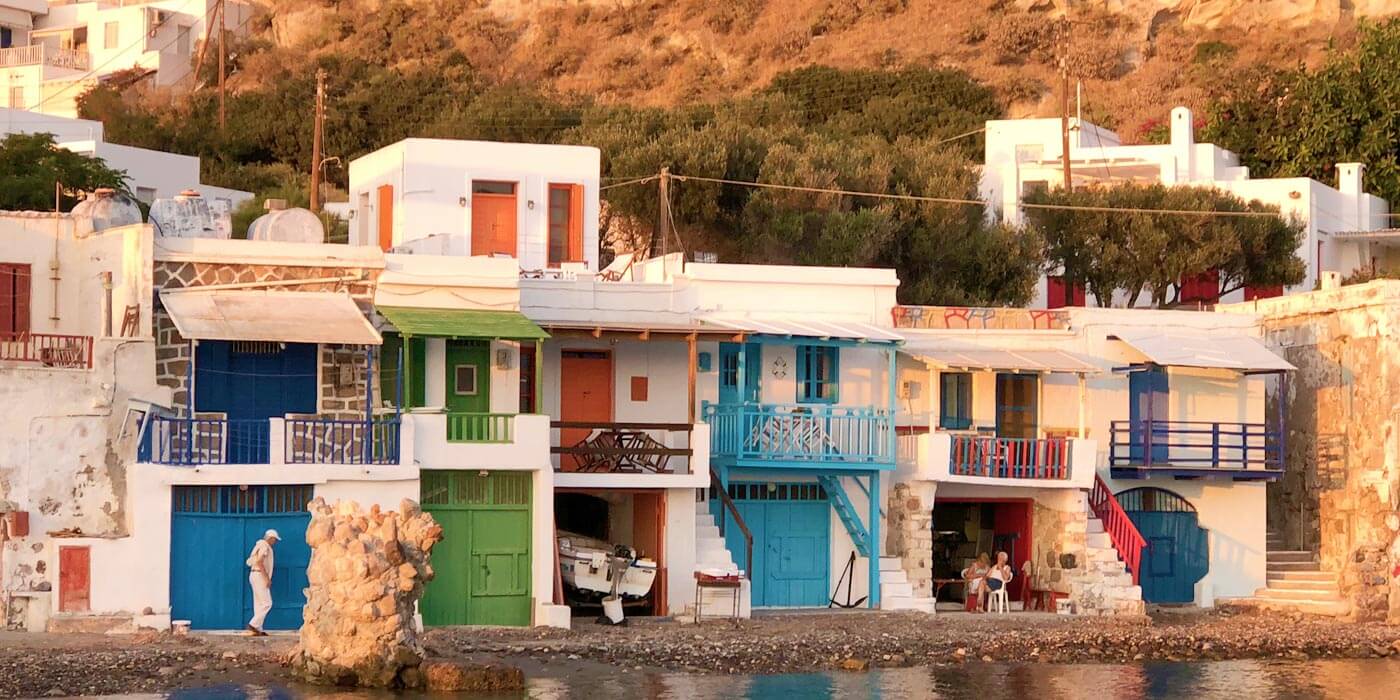 The port today is no longer situated at sleepy Klima but at the bustling little town of Adamantas. Here visitors should hire a car, for despite its charms one must explore the 70 or so wonderful beaches – Papafragas, Paliochori, Firiplaka, Provatas and the lunaresque Sarakiniko – each fronting exquisite azure-blue seas.

It is also definitely worth the drive up into the hills to find Plaka, with its pretty little laneways too narrow for any car and home to some cute boutique shops offering sandals, jewellery, summer dresses and delicious cakes and pastries.

Milos is also becoming an increasingly popular geotourism destination. The most southeasterly of the Cyclades boasts a unique combination of rocks and minerals formed by volcanic eruptions, tidal waves and earthquakes. Indeed, the island has been heavily mined from the Neolithic period until the present day. For those so inclined, seven educational and exhilarating ‘geowalks’ have been established showcasing the isle’s impressive wealth of minerals and varied strata; check out the Miloterranean Geo Experience for something off the normal tourist track. 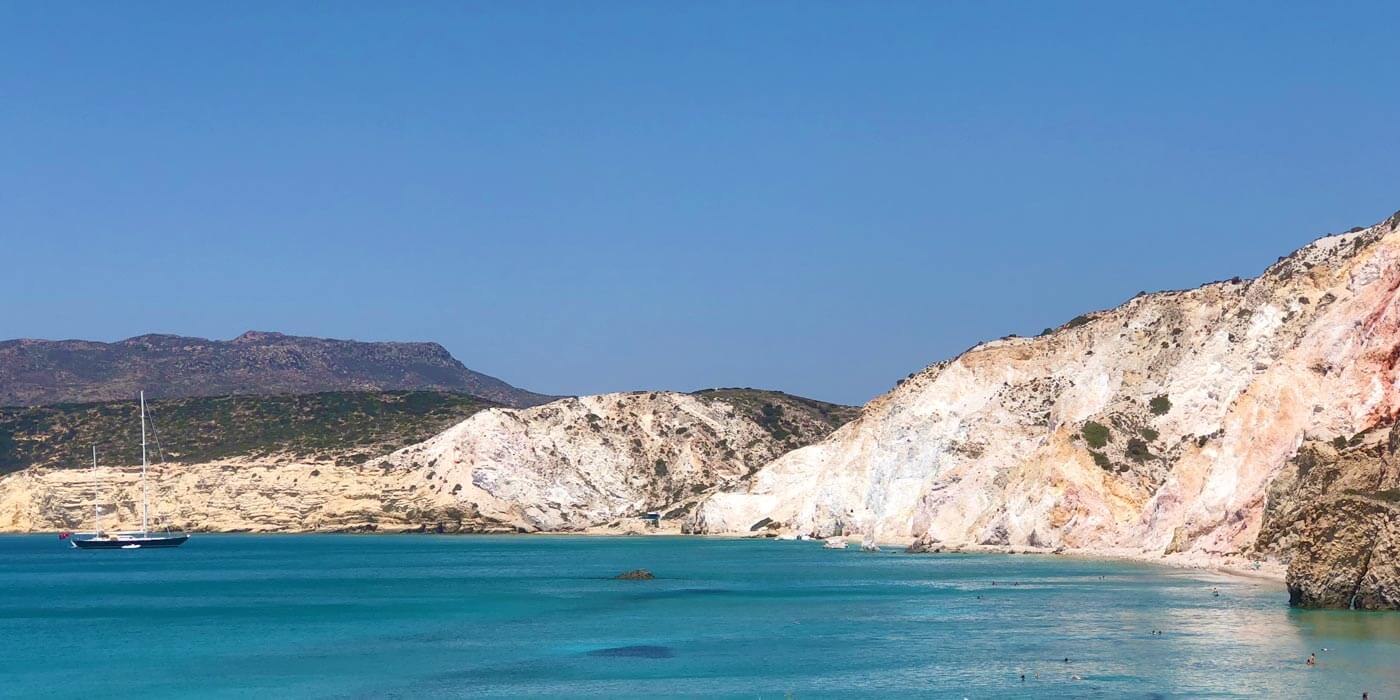 The best way to move between the islands is, of course, by slow boat, and on board the ferry you are able to take in all the differing parts of the archipelago. How marvellous it would be to have the time to step on and off whenever and wherever you fancy, when encountering such dreamy spots as the sophisticated Sifnos.

But, like most people in this day and age, there is a schedule to keep and we press on to our next port of call, Paros.

Here, amid the hustle and port bustle on arrival, visitors are greeted by a windmill (now the local tourist information office). After a quick look around (some things are best saved for when there is no rush), we hop onto the three-euro caïque ride to Krios Beach where we are staying in yet another picturesque room with a view right on the water’s edge. Here, just metres off the beach, is excellent snorkelling with a wide variety of numerous inquisitive fish competing for my mask’s attention. 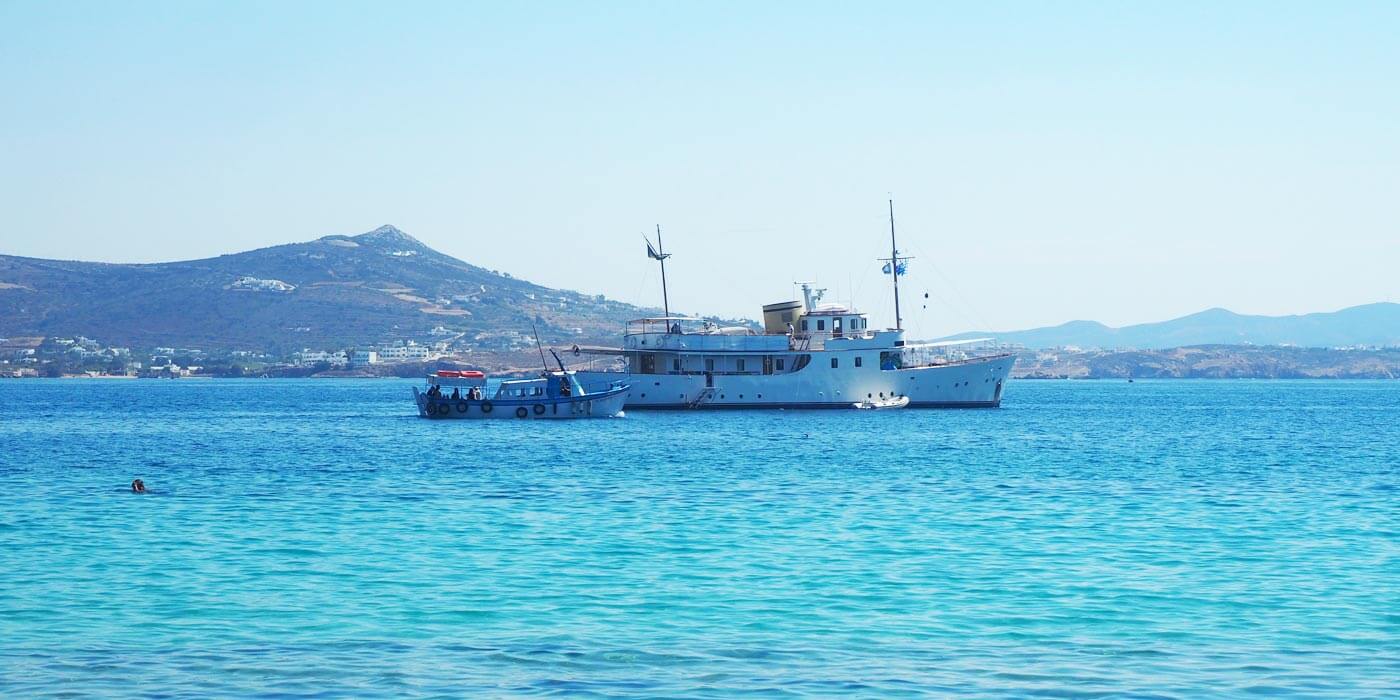 Paros, like Milos, has lots to do and see. Antiparos of course – just a few euros to take the hire car across the 300-metre stretch of blue to Paros’ smaller, but equally interesting, less populated sibling.

One of the favourite spots on Paros is Naousa, the pretty little port with its Venetian castle at the entrance now surrounded by chic shops, kafenia and restaurants of all styles, from the traditional to modern with a variety of cuisines.

Talking of cuisine, back in Paros one might think it Paris, if you eat in the charming courtyard of Chez Fred in Parikia. Stou Fred, as the Greeks say, is the latest restaurant of insatiable TVB celebrity global chef, 50-year-old Fred Chesneau. The plat du jour featured Hellenic buckwheat pancakes, Thai mango salad, prawn bisque and Saigon pork tenderloin.

The gateway to Greece is, of course, Athens, the cradle of civilisation. We decided to make the most of our short stay here to take in the incomparable Acropolis, by stopping at the excellent and helpful InterContinental Athenaeum. Missing the islands already, though, our last meal in Hellas was taken at the hip Istioploikos (literally, sailing club) above the Piraeus Yacht Club in Mikrolimano (Little Port). Here, with the zephyr blowing through this open, modern space, drinking a glass of Moscofilero, it felt that the Cycladic Meltemi winds continued to ensnare our hearts.

The new champagne gifting concept with sustainability front of mind

‘An extraordinary journey’: Why the world’s best whisky partnered with Bentley