The Tastes of Japan

There are destinations that move you with their beauty, some that sweep you back in time, and others that worm their way into your heart or, in the case of Japan, steal it with blinding neon-lit force.

As understated as it is bold and as traditional as it is futuristic, it is very hard not to fall a little in love with the yin-yang personality of Japan. A country of compelling contrasts, 1000-year-old shrines rest humbly at the feet of towering skyscrapers and streets of neon cocoon tranquil green spaces. Japan is also an epicurean paradise where bizarre novelty restaurants sit brazenly alongside Michelin-starred fine-diners and a proliferation of more casual but incredible eateries provides visitors an opportunity to say hai (yes) to a gourmet experience on every corner.

The Tastes of Japan, Tokyo

Even in the futuristic megalopolis that is Tokyo, bushido – the complex moral code of the samurai – is still preserved and chivalry is an everyday value. In fact, Tokyo is one of the most accommodating cities I have visited, politeness seemingly a national preoccupation. All you have to do is look dumbfounded with a map and you won’t only have offers of help but your valiant saviour will probably insist on walking you to your destination – handy given how easy it is to get lost among the many nameless streets of the world’s biggest city. But nowhere is the city’s chivalrous attention more obvious than in the reverent service at the new and breathtakingly beautiful Aman Tokyo. 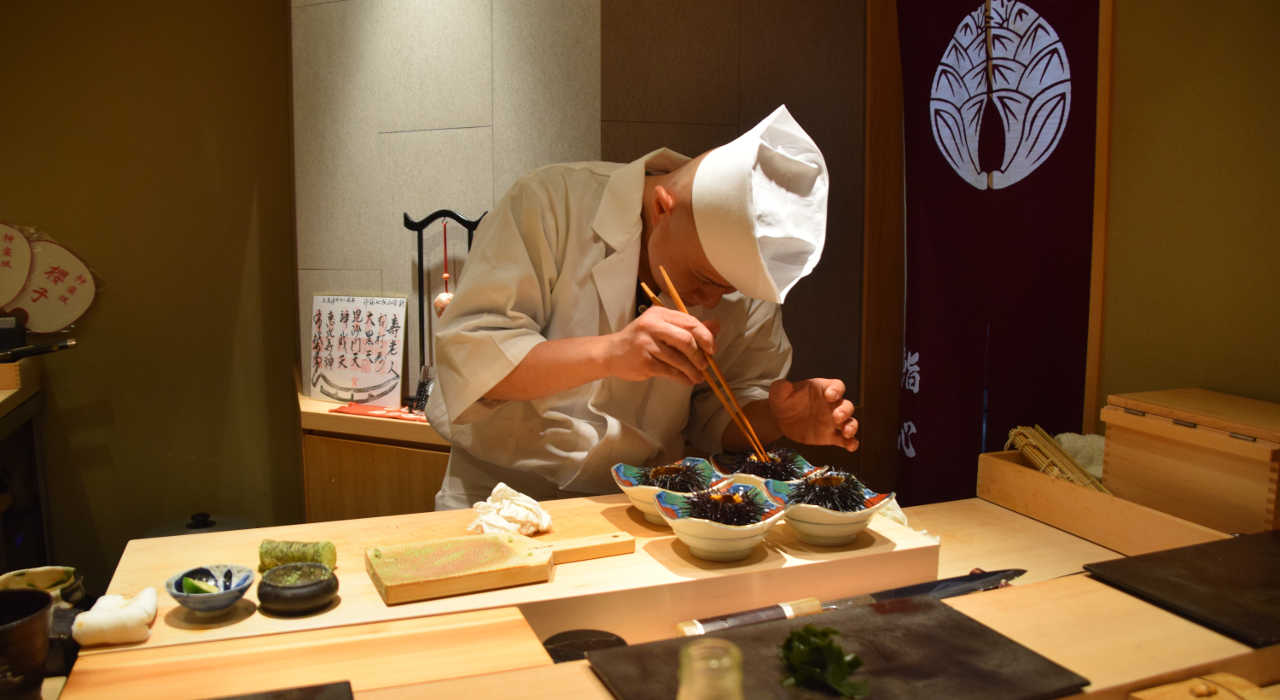 The lobby is a cavernous yet paradoxically intimate space of light and dark. An enormous ikebana flower arrangement sits in reflective water under a soaring ceiling of washi paper that mimics the interior of a Japanese lantern to spectacular effect.

From breakfast to dinner, the restaurant is sublime, with both Western and Japanese meals setting an incredible standard. The extraordinary fashion-themed afternoon tea is a marvel with handbags and high-heels turned into tasty treats alongside ribbon sandwiches. 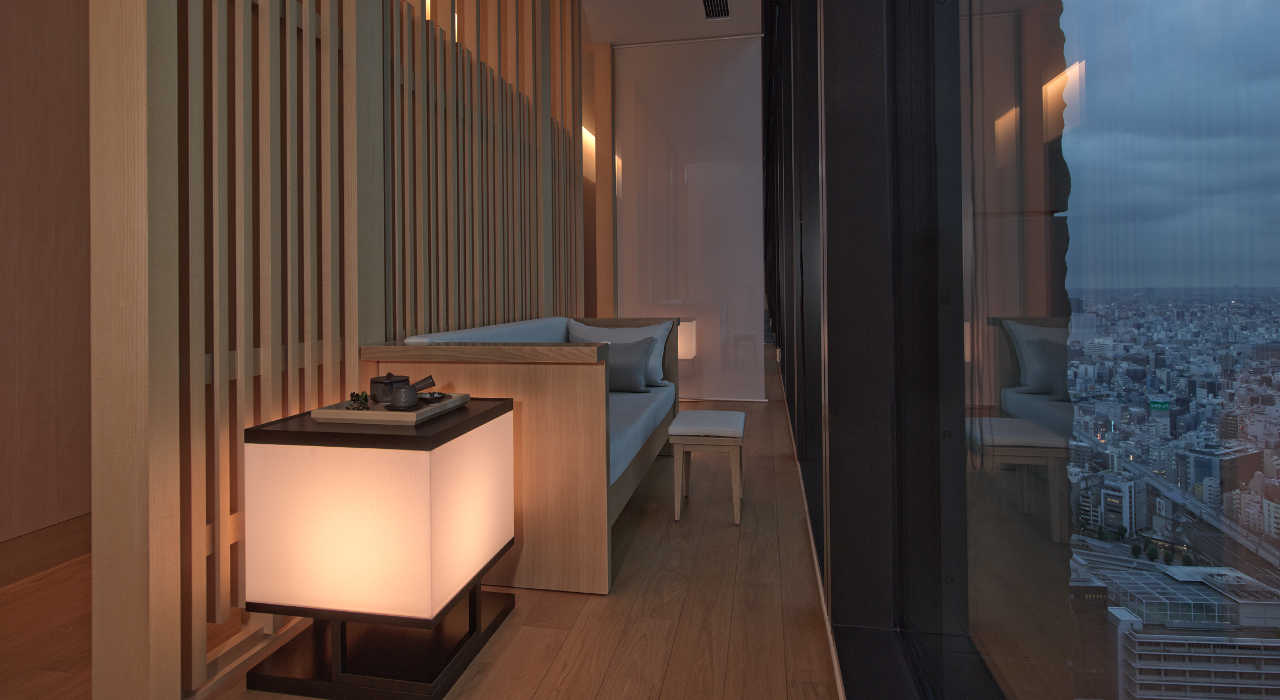 A 30-metre black, basalt-lined infinity pool is as spectacular as the views it offers over Tokyo and a spa spanning two floors features onsen-style bathing, treatments inspired by seasonal herbs and traditional Japanese medicine.

If you can tear yourself way from the rarefied air of Aman Tokyo, try one of the hotel’s signature experiences, including an incredible tour of Tsukiji Market with a highly qualified chef that comes complete with a meal of revelatory sushi, served with the utmost reverence and etiquette in a tiny high-end sushiya.

Leap out and immerse yourself in the city for a richer experience. Head underground to Tokyo Station’s Ramen Street where, even among some of the best ramen stores in the world, Rokurinsha is a standout. Visit Harajuku for quirky boutiques, candy-haired Harajuku teens and Anniversaire Omotesando, popular for its limited-edition champagne and chocolate. Or more refined Ginza, the place to nibble on Ladurée macarons between delving into the flagship boutiques of the world’s most coveted luxury brands and high-end department stores with floor after floor of incredible food.

Home to almost a quarter of Japan’s national treasures – as well as an incredible wealth of World Heritage Sites, temples, shrines and palaces – the former imperial capital of Japan is a tranquil alternative to the frenetic pace and hyper–stimulated energy of Tokyo. 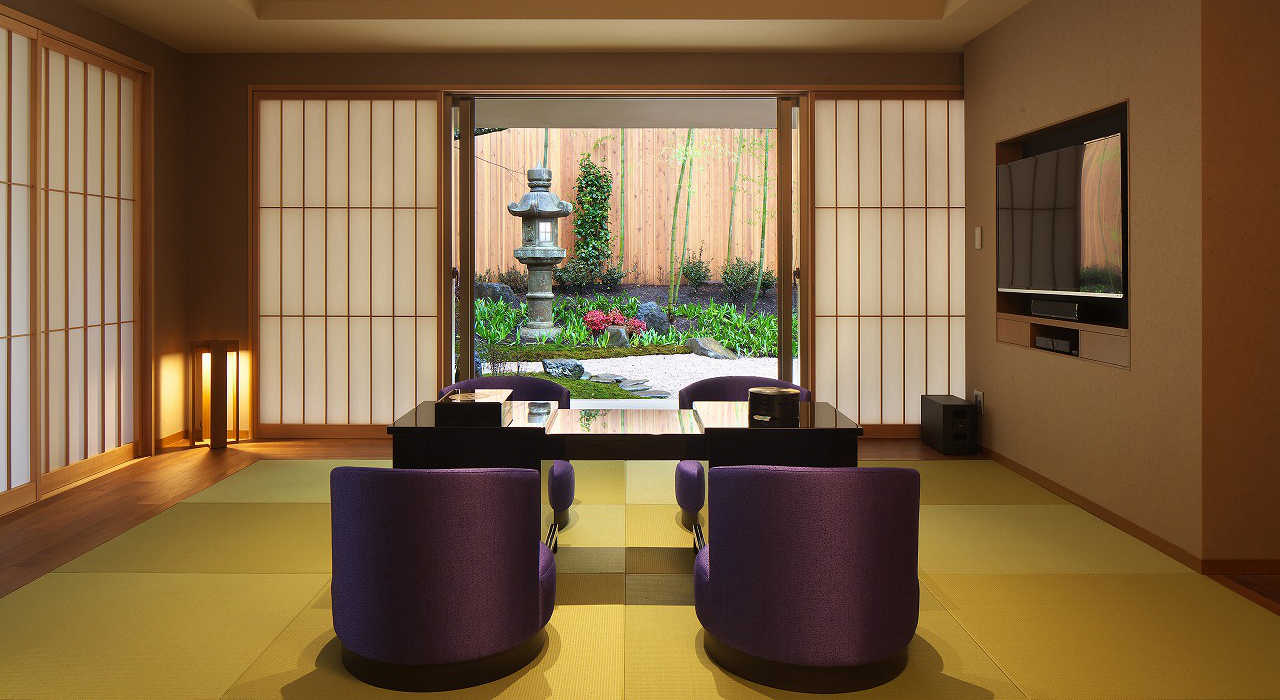 Kyoto is establishing a new identity as a luxury destination where travellers can embrace authentic Japanese culture in lavish style. For those who seek the romance of a stay in a traditional ryokan but don’t fancy sleeping on the floor, Starwood has just opened the doors to Suiran, its first Luxury Collection hotel in Kyoto, at Arashiyama. Fusing ancient tradition with modern comfort and flair while paying homage to ryokan style, the hotel’s 39 opulent suites come with comfortable Western-style beds, some boasting pretty terraces and open-air baths. Private spa treatment rooms also feature open-air baths as well as traditional Japanese massage treatments.

A kaiseki dinner is a must-try experience for visitors to Kyoto. The traditional multi-course meal of small, intricate and technically complex dishes can be enjoyed in Suiran’s signature restaurant, Kyo-Suiran, or at many fine-dining establishments across the city. Of the seven three Michelin-star restaurants in Kyoto, one of the very best is the tiny Mizai, located in leafy Maruyama Park in Kyoto’s former geisha district and famed for its devotion to the spirit of kaiseki.

For a more casual, yet equally authentic experience, visit Menbakaichidai for ramen, blackened and infused with an incredible smokiness in an explosive spectacle by the addition of flaming onion oil. If you’d like to learn to prepare ramen, Menbakaichidai has also launched its own Ramen University. 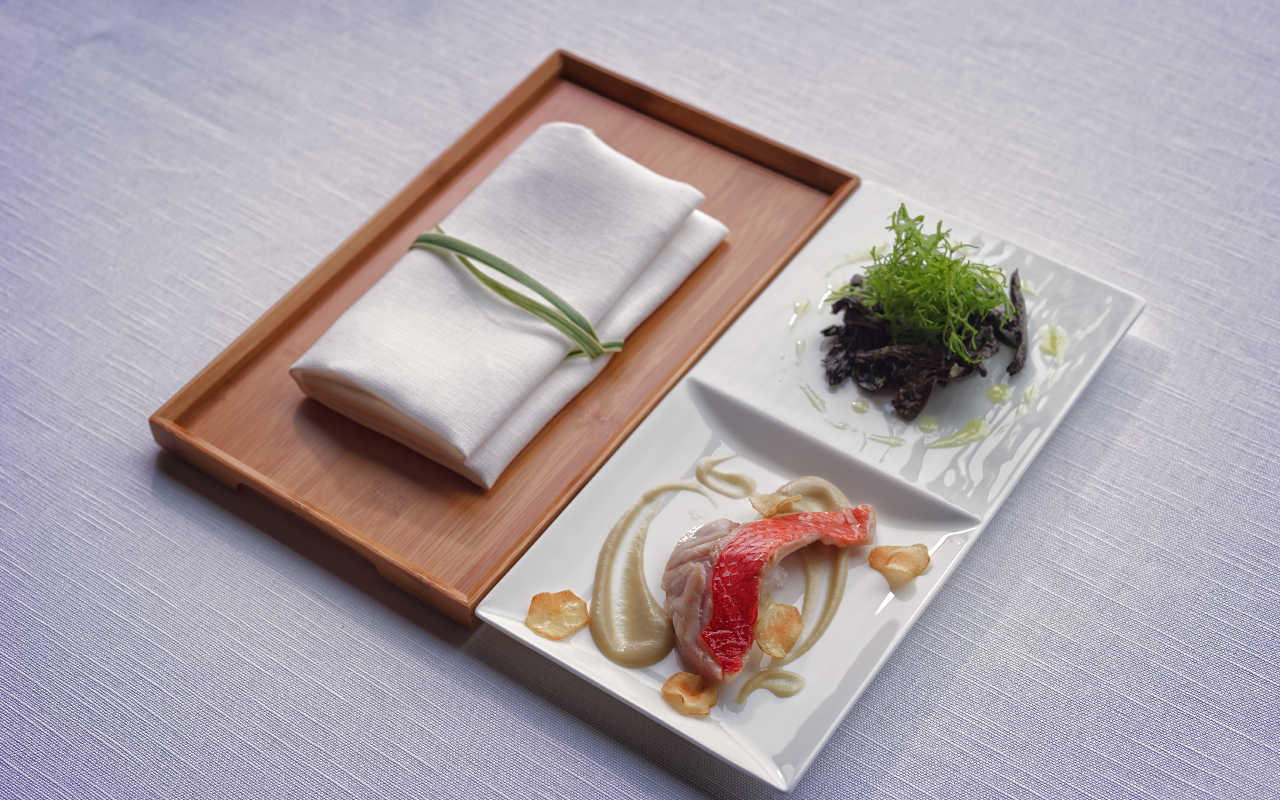 While a 16th-century shogunate castle is Osaka’s most iconic structure, and snippets of 19th-century Osaka can still be found, the city is better known for its modern architecture, shopping and a food scene revered the world over.

It has been said that the people of Osaka spend more on food than on anything else and with its unique culinary culture it is no surprise. Visit Yamachan in Abeno-ku for the best takoyaki in Osaka, where the popular dish originated; crisp on the outside and creamy on the inside, the octopus-studded balls are dangerously addictive. The city’s most famous dish is okonomiyaki, a thick savoury pancake stuffed full of vegetables, meat, or seafood. Mizuno in the city’s neon-lit Dotonbori district has lines out the door, but it’s worth the wait. If you want to try something positively death defying, fugu sashimi might be for you. Made from the flesh of the poisonous puffer fish be sure that the restaurant you choose employs certified chefs unless you want the meal to be your last.

Then, of course, are the stars… Michelin stars, that is. The city has 124 restaurants worthy of one or more of the coveted stars, including the sublime fine dining restaurant, Pierre, at the InterContinental Osaka, where French cooking techniques are fused with Japanese ingredients to spectacular effect. 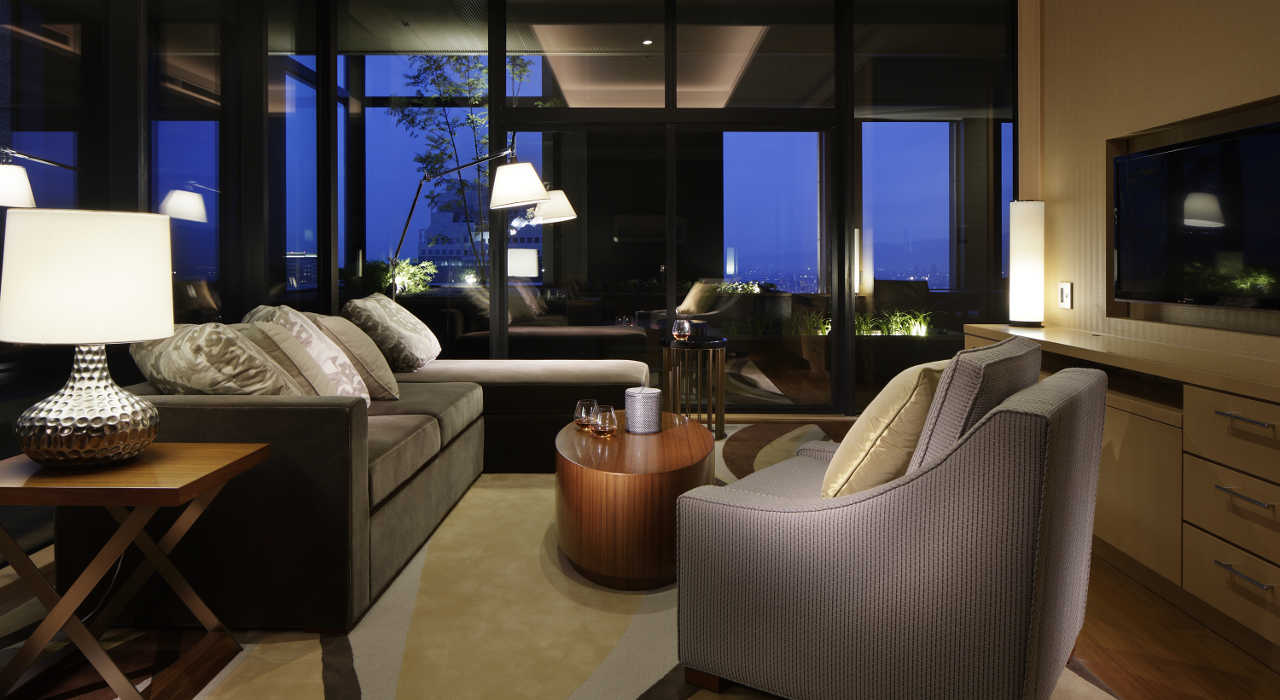 The InterContinental Osaka is the city’s newest five-star hotel, its sleek spaces filled with fine modern art and a palette of wood and stone that beautifully captures the feeling of both Osaka’s technology and ancient culture. Only minutes from Osaka Station on the newly developed Grand Front Osaka, the hotel offers luxuriously appointed guestrooms, multiple dining options, a sprawling spa, in-house wedding chapel and an immaculate indoor swimming pool.

The wraparound balcony of one of the hotel’s sprawling and modern three-bedroom residences is also one of the best spots to enjoy a glass of the house Louis Roederer Brut and stunning views over Osaka.