Escape the crowds in Tahiti at Tikehau, Rangiroa and Taha Islands

Home to a bounty of vanilla plantations, islet wineries and private island getaways, Dilvin Yasa looks past Tahiti’s heavy hitters and dives into the emerald waters of its gorgeous lesser-known islands.

After Bora Bora and Moorea

I’m going to be honest; when you’re lying by your palm-fringed private pool at the grand Four Seasons Resort Bora Bora, it’s difficult to imagine there could be more to life than this. And cheeky stay at InterContinental Moorea Resort & Spa aside, it’s even harder to imagine that there could be more to the islands of Tahiti than Bora Bora and Moorea.

Literature tells you this is not the case, of course, since the islands of Tahiti are actually 118 islands and atolls spread across five idyllic archipelagos – the Society Islands, Tuamotus, Marquesas, Gambiers and Australs – each one of them a haven of powder-soft motus ringed by lush palm trees. Curious about what lies beyond those jagged peaks? Dig deeper, delve further and be adventurous; nature will repay you in the most spectacular of ways.

The best of Taha Island

Motoring along in a water taxi from nearby Raiatea (a 45-minute flight from Tahiti), it’s the sticky sweet scent of vanilla that has you enchanted long before somebody screams, look at all that amazing coral!

The coral, of course, is expected; the vanilla tends not to be – until you realise that you’re heading to the island that produces 80 per cent of the world-famous Tahitian vanilla, its farms dotting the island’s gentle hills. Although popular with snorkellers for its shallow coral garden between Motu Tautau and Motu Maharare, where you can drift-snorkel through scores of rainbow-coloured fish, the clear highlight in Taha’a is hiking Mount Temehani, with the island’s scenic plantations interspersed with banana, watermelon and coconut groves.

Feeling lazy? Jeep safari tours take in not only the hills but also those aforementioned vanilla plantations and local pearl farms – known to be of exceptional quality here.

Private residences are available for rent, but this is also the home of Le Taha’a Island Resort & Spa, a sumptuous Polynesian-style property known to offer all those luxuries (butler service, babysitting, fine food) often unheard of in tiny faraway islands like this.

Stake your claim, close your eyes and embrace the feeling of mana. The Relais & Châteaux resort has three restauarants on site, featuring French-Polynesian fusion cuisine and an inviting ambience, whether it’s a feet-in-the-sand casual lunch, cosy dinner for two, or sumptuous open-air breakfast. You can also arrange a romantic private dinner in your overwater villa or breakfast by the lagoon delivered by canoe.

Tikehau, a short flight from Tahiti

Pink-sand beaches and azure lagoons aside, it’s difficult to establish which is the greater sell of this atoll located a 55-minute flight from Tahiti. Is it the population board that reads 529 residents? Or is it the abundant marine life so teeming with eagle rays, marine turtles and dolphins that it left Jacques Cousteau’s research crew enthralled?

We dare say it’s the heady combination of relative solitude and the visual spectre of life underwater that proves irresistible to those who venture here.

We’re pleasantly surprised to discover that refined, romantic accommodation options are plentiful. You can opt for a thatched-roof overwater bungalow at Tikehau Pearl Beach Resort perhaps (arguably the jewel in the atoll’s crown), or look into hiring a private island retreat such as Tikehau Fafarua Lodge, where a team of discreet staff caters for guests’ every whim, and a boat and captain offer excursions on the lagoon. Just the thing for those seeking a refined haven in absolute privacy. 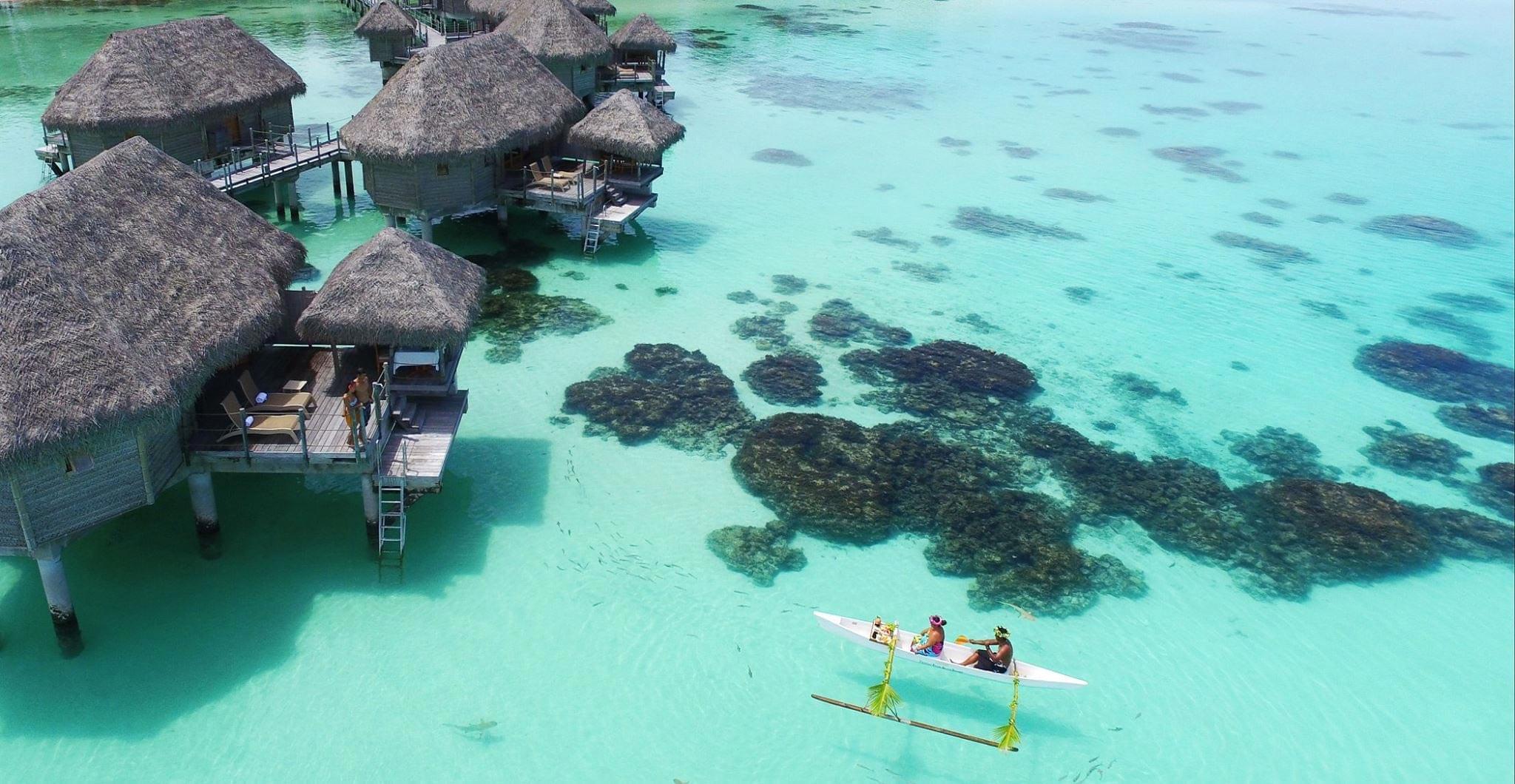 It’s clear Tikehau is all about water activities, and as the generations of fishermen who call the atoll home will tell you, all exploration of Tikehau should begin – and end – with a dive or snorkel around her coral remnants before enjoying a private picnic on a motu.

Ask your guide to show you around the tiny islet of Bird Island for something truly spectacular, but don’t discount the joy that comes with exploring the island on your own – particularly the quaint township of Tuherahera – by bicycle at a leisurely pace.

You’ve enjoyed the bold reds of Bordeaux and emptied Mendoza of its Malbec, now what say you to kicking back under a canopy of tropical palms and indulging in a local rosé courtesy of Dominique Auroy Winery? Located on a small islet accessible only by boat, it’s an unusual thing drinking wine in a tropical haven where grapes must be transported by canoe during harvest, but unforgettable just the same.

Even if wine is not your thing, all is not lost; although Rangiroa – a necklace of 400-plus islets strung together over 177 kilometres, just a 55-minute flight from Tahiti – is making a name for itself in the wine world, most make the pilgrimage for its breathtaking dive spots: Tiputa Pass, Avatoru Pass and the Blue Lagoon.

This is indeed the place to live largely underwater, however, there are two above-sea-level commitments every traveller should make: watching the dolphins frolic at Tiputa Pass at sunset, and commandeering a speedboat to check out the main villages of Avaturo and Tiputa. With their coral churches, craft centres and colourful restaurants, there’s no better way to get a sense of what island life really is.

Then return to your lodge, be it the spectacular Hotel Kia Ora Resort & Spa proper, where bungalows and pool villas lie interspersed between lush expanses of palms, or its private island hideaway, Le Sauvage, where you can unwind and dream under a canopy of stars.

Le Sauvage is an hour’s boat ride fom the resort, its remote location offering you the chance to truly get away from it all without interruption; access to emails, phone calls and even electricity is blissfully impossible here.

Air Tahiti Nui flies to Tahiti three times a week via Auckland, with Air Tahiti providing connections to the outer islands. Aremiti offers a ferry service between Tahiti and Moorea.

5 things you must tick off your Tahiti bucket list

The Islands of Tahiti 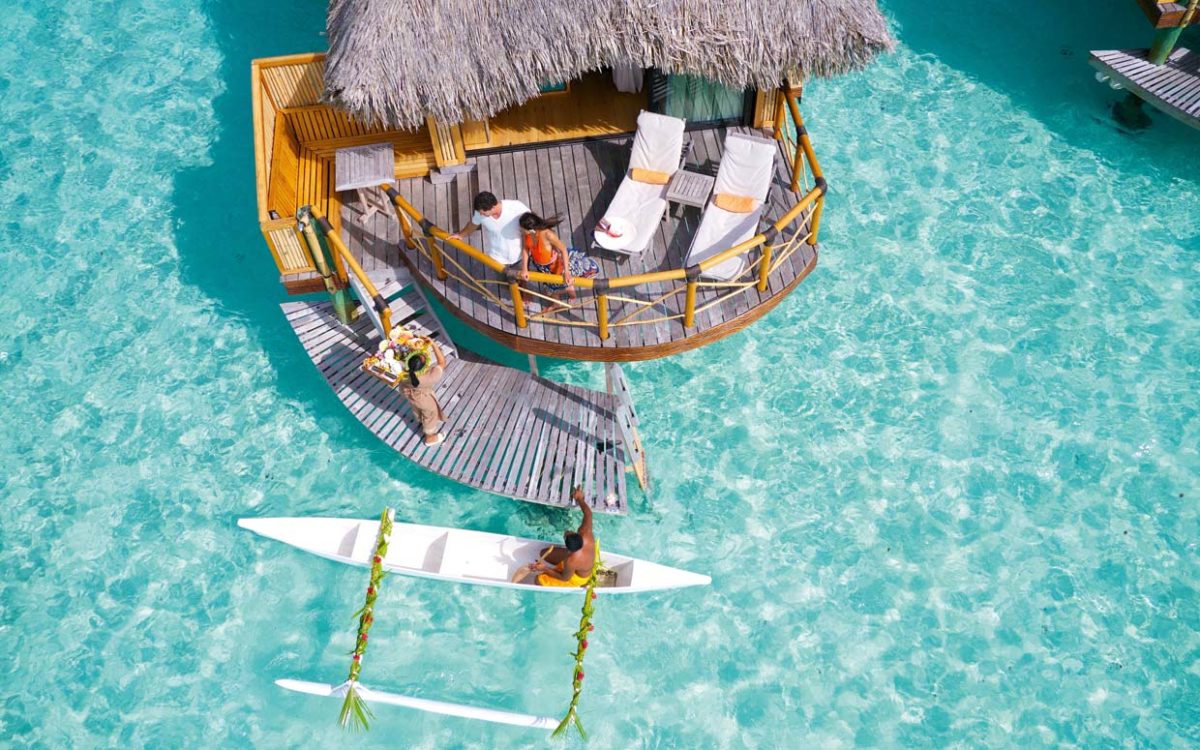