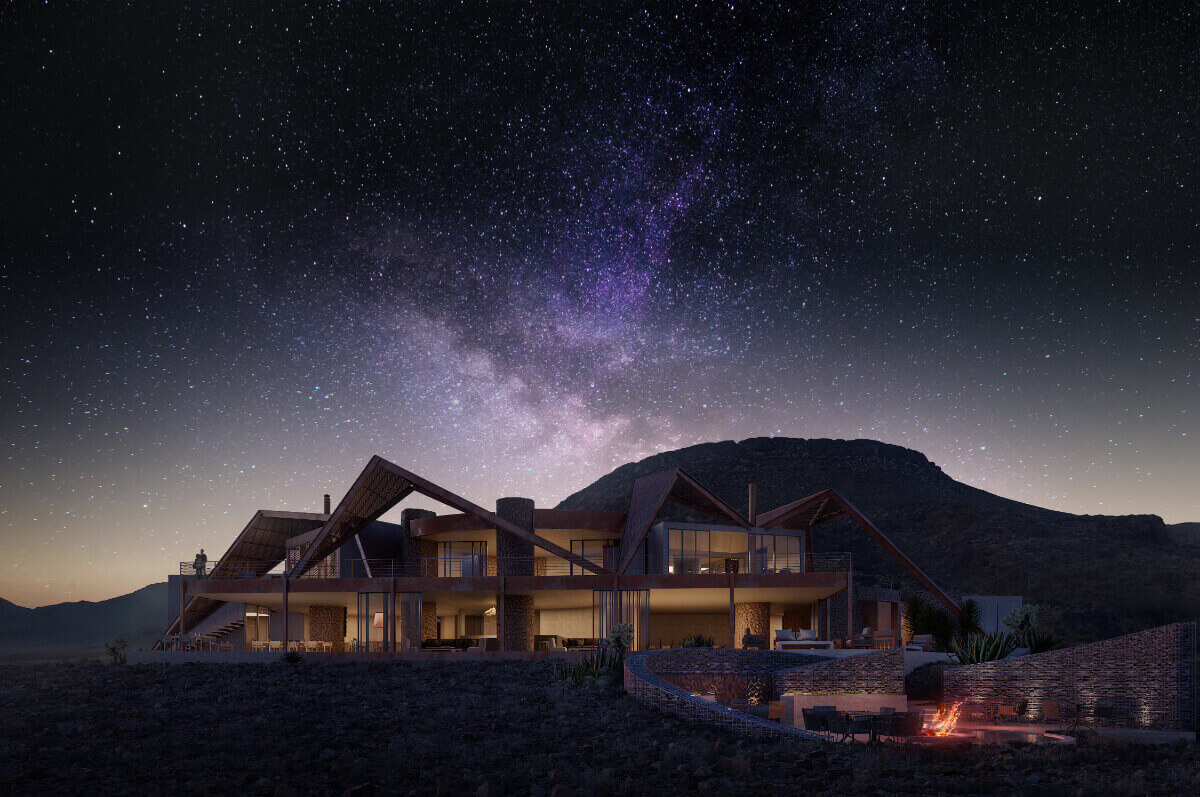 Kimberly Rosbe heads to Sossusvlei and discovers the Namib desert shines most brightly at night.

“It was a gamble from the start,” environmentalist visionary Stephan Brückner bellows over the roar of the propeller in our three-seat charter as the pilot navigates Sossusvlei’s towering fiery orange sand dunes rising into cloudless cobalt skies.

It’s March 2020, right before the coronavirus shut Namibia’s borders, and we are flying together to andBeyond Sossusvlei Desert Lodge’s private airstrip in the remote NamibRand Nature Reserve.

By local tongue, Namib means ‘big empty space’.  This 1,900-kilometre sea of sand sprawling along the Atlantic coastline of Angola, Namibia and South Africa, is the world’s oldest living desert, existing for at least 55 million years.

Beneath us, rays of light dance across a kaleidoscope of surreal undulating landscapes with endless horizons. Sweat rolling down our glistening foreheads in the stifling cockpit caldron, Stephan leans in to explain how it all began.

Read more:
The best ways to experience South Africa from the sofa
Interview: An expert guide to planning a luxury safari
The best tours to explore Australia in 2021

The gamble of this breathtaking place originated from a dream of Stephan’s father, the deceased conservation hero Albi Brückner who founded the NamibiRand Nature Reserve in 1992.

Albi literally and figuratively tore down boundaries by pioneering the ‘no fences’ concept in Namibia.  He extended desert frontiers, through the integration of former sheep farms, to create one of Africa’s largest self-sustaining private reserves.

His life’s mission returned almost half a million acres of land to wilderness.

Today, there is not one wire or wood divide in sight, only vast open expanses. A natural domain unhindered, wildlife can roam free.

As our plane nears the dusty desert floor, we spot a Hartmann’s mountain zebra and a flock of ostriches darting amidst rapier-horned oryx grazing near a lone fever tree. These desert-adapted animals rely on a healthy ecosystem to survive extreme temperatures and scarcity of rainfall.

Upholding his father’s legacy, Stephan is now the reserve’s guardian, charged with protecting the rich biodiversity of this fragile habitat.

Descending sharply to the landing strip which consists of merely worn apricot dirt with a single flag stuck in the sand, Stephan explains that the challenge of his crusade also encompasses preserving the rare spectacle above the Namib Desert.

Four-wheel driving from the airstrip through sweeping buttermilk desert as the sun sets behind iridescent jagged purple mountains, andBeyond Sossusvlei Desert Lodge materialises in the distance.

My guide signals above the jeep into the glowing twilight. A star-studded sky begins to ignite like fireflies. I quickly discover that despite Sossusvlei’s otherworldly landscapes illuminated during daylight, the real magic shines most brightly at night.

NamibRand Nature Reserve holds the distinction of being Africa’s only International Dark Sky Reserve which represents an astronomer’s dream epitomising the clearest, constellation visible, unpolluted night skies on the planet.

Maintaining the quality and darkness of the sky commands an integral part in the local ecosystem’s balance.

Studies have shown that light pollution can have detrimental effects on animals, disrupting hunting success and impacting the established equilibrium between predator and prey.

Consequently, a healthy nocturnal environment for animal life in the Sossusvlei area is reliant upon cultivating a pollution-free, clear night.

NamibRand Nature Reserve ensures that its nighttime environments have little to no impact from artificial light or light pollution. This responsible stewardship of the night sky requires stringent outdoor lighting standards for the entire reserve including its properties and tourism operations.

Along with a handful of other operators, including hot air ballooning Namib Sky Adventures, their collaborative efforts on behalf of NamibRand Nature Reserve support this pristine desert’s natural resources.

It’s a prime example of high-end tourism sustaining and preserving land and its wildlife.

To the stars andbeyond

After dining under a blanket of stars on my private villa’s massive outdoor deck overlooking unobstructed sand vistas, I switch off my lap pool’s underwater lights and gaze up at the galaxy ablaze in the black desert sky. Tonight’s entertainment is a magnificent celestial theatre.

Bordering the International Dark Sky Reserve of NamibRand Nature Reserve, andBeyond Sossusvlei Desert Lodge reigns as one of the optimal locations in the world for stargazing.

Its recent renovation is a minimalist masterpiece of glass, rock and steel capitalising on its unique dark sky location.

Celestial design features include retractable skylights above the bed for marvelling at the solar system while falling asleep.

Heavenly star feasts are complemented by evening education with andBeyond’s resident astronomer Patrick Hanrahan who spends every night studying the constellations with research-grade telescopes from the onsite, state-of-the-art observatory.

Patrick’s nocturnal existence encourages visitors at any hour of the darkness.

Gateway to the galaxy

Nearing midnight in the utter silence and tranquillity of the Sossusvlei desert, I climb the steep hill behind andBeyond’s lodge to an open-air, stone rotunda forming a natural planetarium.

I’m greeted at the top of its spiral stairway by Uncle Pat, as he’s affectionately called by staff.  Softly spoken, Patrick’s lifelong obsession with the stars is infectious.

“On clear nights when my daughter was young, my favourite memories are teaching her about the stars from a picnic bench in our backyard,” he discloses.

Armed with a Mead LX200R 12-inch mega telescope lens reaching 200 million light-years away, my star lesson begins. From our perch at the rotunda’s zenith, a 360-degree twinkling canopy envelopes us.

For those who love astronomy, there are few sights more awe-inspiring than the clarity of light in the Southern hemisphere above the Namib Desert.

Under the tutelage of this renowned astronomer, secrets of the Southern skies unfold. Patrick’s 100 milliwatt laser isolates the mysterious incandescence of the Magellanic Clouds, the Milky Way’s arching belt of white lights, bands of zodiacal illumination, nebulae where new stars are formed, and infinite radiant constellations.

“I’ve explored these objects endlessly and still can’t get enough,” he tells me.

As the hours pass, Patrick reveals NamibRand is one of the best settings on Earth to catch a glimpse of the elusive Gegenschein phenomenon.

Through his powerful telescope, Patrick also shows me ‘The Pointers’ (Alpha Centauri and Beta Centauri) which aim at the most famous, yet smallest of all constellations found south of the equator called Crux, the Southern Cross.

Adjacent is a distinct dust cloud so dark it was named Coalsack. Incredibly, Patrick explains, seven of the eight orbiting planets can be seen with the naked eye from NamibRand.

He forewarns, “Watch out for the Supermoon in the coming days.”

Moments later, I behold my first meteor, more commonly known as a shooting star. I make a wish for this dark sky reserve to be preserved in perpetuity.

With the devastating economic impacts of the COVID-19 pandemic threatening to derail decades of conservation work in Africa, it is notable that this place remains unscathed. This singular location the virus couldn’t reach – the NamibRand starry night sky.

Surf’s up. The best Maldivian resort to learn how to hang ten

10 of the best luxury hotels in Switzerland

A look inside COMO Laucala Island, Fiji – one of the world’s most exclusive resorts