Every traveller should add staying at a Peninsula Hotels property to their bucket list. There are only 10 in the world, with more than half of them in Asia, and The Peninsula Tokyo doesn’t disappoint. A refined, 24-storey structure that is among the best-designed hotels in the Japanese capital’s five-star club, it offers singular service, large rooms tricked out with high-tech gadgets, and exceptional food and beverage options. Plus, the location is hard to beat: opposite the majestic and dignified Imperial Palace, home to Emperor Akihito and his family, in the upscale Marunouchi district, just a short walk from the premier shopping and dining hub of Ginza.

The Peninsula Tokyo opened in 2007 and at the time was the first new-build hotel the city had seen in a decade. Architect Kazukiyo Sato designed the freestanding structure in the image of a Japanese lantern. The building’s exterior, made of amber Namibian granite, stands out nicely against its grey-stone neighbours. Inside, the talents of Yukio Hashimoto are on full display. The interior designer has a love of natural materials and a desire to get urban dwellers in touch with nature, hence the heavy reliance on woods of various shades and plants, both inside and out, that help reflect Japan’s infatuation with the four seasons. Hashimoto also spends a lot of time thinking about lighting and that’s reflected in the warm ambience that stretches from the lobby straight through to the hallways and rooms. Japanese design and culture are everywhere, from a recurring wooden lattice motif and corridors that serve as nods to old Kyoto, Japan’s former capital, to the use of washi paper and handwoven cedar wood panels known as ajiro.

The entrance and lobby are designed to convey a feeling of warmth and welcome to guests, but never fail to incite a sense of awe. Visitors are able to feast their eyes on roughly 1000 pieces of art, with two pieces, in particular, vying for attention. One is Hashimoto’s concave chandelier, made up of more than 1300 crystal LED light bulbs and designed to resemble a cloud of fireworks or fireflies. The other is the remarkable bamboo sculpture by Keisen Hama, an inspired representation of a dragon laying over the universe that’s meant to bring good luck, strength and harmony while keeping evil spirits away. It’s also a reference to the Chinese zodiac, thereby acting as a tribute to the Chinese heritage of The Peninsula Hotels. But my favourite piece is the dazzling, 70-metre-high fibreglass sculpture known as the Void, viewable from the windows of all lift landings.

The Peninsula Tokyo has 314 guest rooms and suites, some of which overlook the grounds of the Imperial Palace. We stayed in a spacious, 54-square-metre deluxe king room, a high-end hideaway filled with cherry wood, red and black Japanese lacquer, earth tone-coloured carpet and furniture, and recessed ceiling lights. The bedroom is separated from the bathroom and dressing room by a sliding door that’s made of a large, rugged slab of horse chestnut. The bathroom itself is dominated by a deep soaking tub that has a stone faucet jutting out from a strip of rough-hewn granite that runs up the length of the wall. The dressing room amps up the luxury, boasting enough space for luggage, your wardrobe, and you as you get ready to take on Tokyo. It’s also the location of the hotel’s famous nail dryer, among the room’s high-tech touches, which also include panels to control lighting and window treatments. The windows themselves are quite large and even though our view was nice, I couldn’t forget the mystical scene I awoke to the first time I stayed at The Peninsula Tokyo several years back when I sipped tea on a rainy morning and watched as fog engulfed the Imperial Palace and its surroundings.

Oh to stay in a Peninsula Suite, described as “the heart of privilege,” a room that “epitomises the ultimate in Peninsula service and tradition”. Oh to be given five minutes to view it. Years ago, I was lucky enough to have a tour. But on my most recent visit, no dice: the 347-square-metre suite was occupied. Thankfully, my memory of its grandeur and amenities are still fresh. There are the floor-to-ceiling windows that offer almost unrivalled views of the Imperial Palace gardens and Hibiya Park; the requisite antique-style telescope (does anyone ever use those things?); the private balcony; the swank bathroom; the grand piano; and the dining room that can seat up to 12 people (for that important business meeting or long overdue family reunion).

Guests can sample Cantonese cuisine at Hei Fung Terrace or enjoy a Japanese kaiseki meal at Kyoto Tsuruya. We hopped in the lift and zipped up to the 24th floor for a pre-sunset reservation at Peter, the grill restaurant named after the COO of The Peninsula Hotels, Peter C. Borer (who, incredibly, has been with the chain since 1981). The style is much more futuristic, a post-post-postmodern kind of feeling with chrome polished trees and a large video screen that alternates between showing bubbles, swaying trees and the odd deer. Diners can sit with cocktails at tables by the windows to enjoy the sunset or gaze at Tokyo’s nighttime glitter. For larger or more intimate gatherings, they can reserve a pod (there’s also a bar). Before the sun goes down, the ambience is clean, crisp and bright, almost stark. After dark, deep blues and purples bounce off the highly polished wood finishes. The transition between the two parts of the day, however, can be somewhat off-putting. The food, though, rarely misses the mark, whether you’re trying the succulent Wagyu beef, the expertly-grilled Hokkaido scallops, or the carefully aged black garlic. 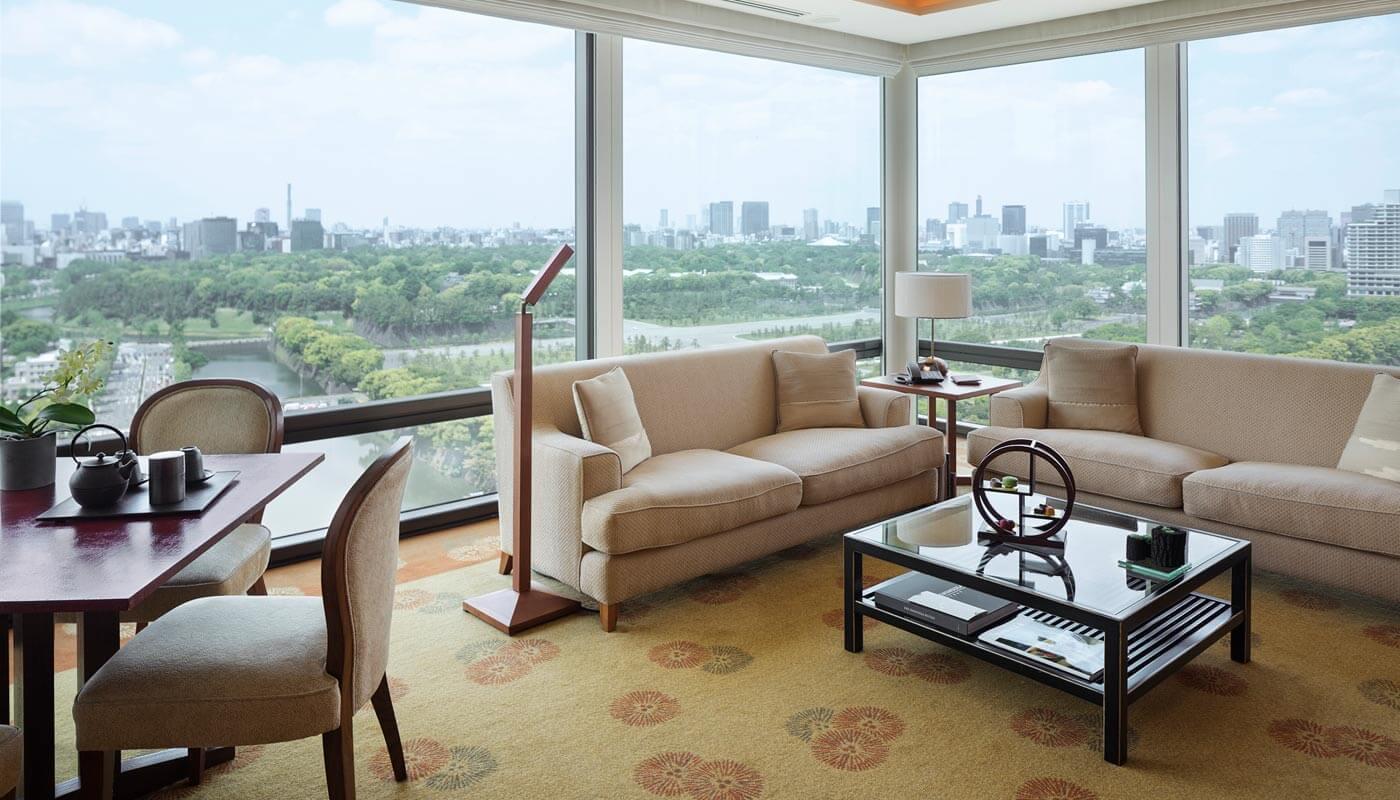 …one of the hotel’s “Walking Bicycles”, essentially an elliptical trainer on wheels. They’re decked out in Peninsula green and battery powered, allowing users to zip along the streets and sidewalks at up to 24 kilometres per hour. It takes a few minutes to get used to it, but once you figure it out you’re off and rolling.

I decided to try something completely different (for me anyway) and opted for a pedicure treatment, thinking it would take the edge off of the 12-hour flight I was facing. The Peninsula Spa has partnered with French podiatrist Bastien Gonzalez to offer foot, hand and nail treatments featuring products from his signature line, Révérence de Bastien. And it’s not just about the aesthetics, as studio manager, Benoit, explained to me. It’s also about providing relief to feet from pain caused by excessive walking or standing, high heels and medical conditions such as bunions. Benoit scraped and finished my feet, cuticles and all, until they were almost unrecognisable, making the skin soft and treating the nails with a product that gave them a natural glow that lasted weeks, while my legs felt lighter and devoid of tension.

Once you’ve had your fill of your room and the restaurants, be sure to check out the health and fitness facilities on the fifth floor (the entire spa takes up 900 square metres). The heart of this part of the hotel is the 20-metre-long heated swimming pool, which offers views of the Imperial Palace gardens and sits beneath a striking, oval-shaped light that’s designed to mimic the moon reflecting on the water. Swimming not your thing? Head to the lobby for afternoon tea, where a range of teas (Organic Coconut Cacao Pu-erh anyone?) with sweet and savoury snacks. The hotel also offers themed options, including Strawberry Afternoon Tea in winter, one of the peak harvest times for Japanese strawberries.

Tackle Tokyo on foot. Grab a train from one of four lines available at the basement level, or hitch a ride in the hotel’s hot wheels: Rolls-Royce Phantom II, BMW, MINI Cooper Clubman hardtop or Tesla Model S. Marunouchi is only a small part of the Japanese capital, but it has a wealth of attractions. Most guests will start with a visit to the Imperial Palace, where you can snap pictures of the old stone walls and moats. The only part of the inner palace open to the public is the Imperial East Gardens, though people can join guided tours of some of the inner grounds. Other sights worth seeing include Tokyo Station, restored and reopened in 2012; the boutiques (Isabel Marant, Paul Smith, Louis Vuitton, etc.), cafés and restaurants on Nakadori Avenue; and the shops and restaurants in the Marunouchi Building and Shin Marunouchi Building.

Parents can relax and leave their baby gear at home. The Peninsula Tokyo can provide cribs, strollers and baby bathtubs, along with products ranging from nappies to shampoo. Older children can take part in the Pokémon Hotel Adventure and go searching for Pikachu, Charmander and other characters. And if you’re a dog owner, don’t despair. You won’t have to leave your canine companion(s) at home, provided they weigh 15 kilograms or less. The hotel lays out the welcome mat for your four-legged friend, offering special bowls, a “canine cuisine” room service menu, beds, blankets and pillows (plus toys, snacks, and – wait for it – nappies). It’s a dog’s life, as we found out when we arrived and saw one pooch decked out in the white page outfits the hotel loans to owners.

The lobby and entrance, while gorgeous and well-designed, just didn’t strike me as the ideal place for breakfast. Perhaps I’ve been spoiled by the luxury hotels that offer this meal on higher floors with better views and less hustle bustle. But I just couldn’t get used to The Lobby’s ambience first thing in the morning. To make matters worse, the food (at least on my visit) seemed subpar and the coffee didn’t pass muster (full disclosure: I’m a major coffee snob).

…every room could have a view of the Imperial Palace and its gardens.

Where to find The Peninsula Tokyo

A rail journey from Tokyo and Kyoto along Japan’s Gold...

Why Tokyo is the style capital of the world