The museum medina is the first of its kind in the Arab world and will focus on shared human stories across civilisations and cultures.

Louvre Abu Dhabi  will open its doors to the public on 11 November 2017. The opening celebrations will include a range of public programmes, including symposiums, performances, concerts, dance and visual arts by contemporary and classical artists.

Located in Abu Dhabi, UAE, Pritzker Prize-winning French architect Jean Nouvel has designed a museum city (medina) under a vast silvery dome. Visitors can walk through the promenades overlooking the sea beneath the 180-metre dome, comprising almost 8000 metal stars set in a complex geometric pattern. When sunlight filters through, it creates a moving ‘rain of light’ beneath the dome, reminiscent of the overlapping palm trees in the UAE’s oases.

On display will be the museum’s important collection of artworks, artefacts and loans from France’s top museums. These span the entirety of human existence –  from prehistorical objects to commissioned contemporary artworks – highlighting universal themes and ideas and marking a departure from traditional museography that often separates according to origin. In addition to the galleries, the museum will include exhibitions, a Children’s Museum, a restaurant, a boutique and a café. 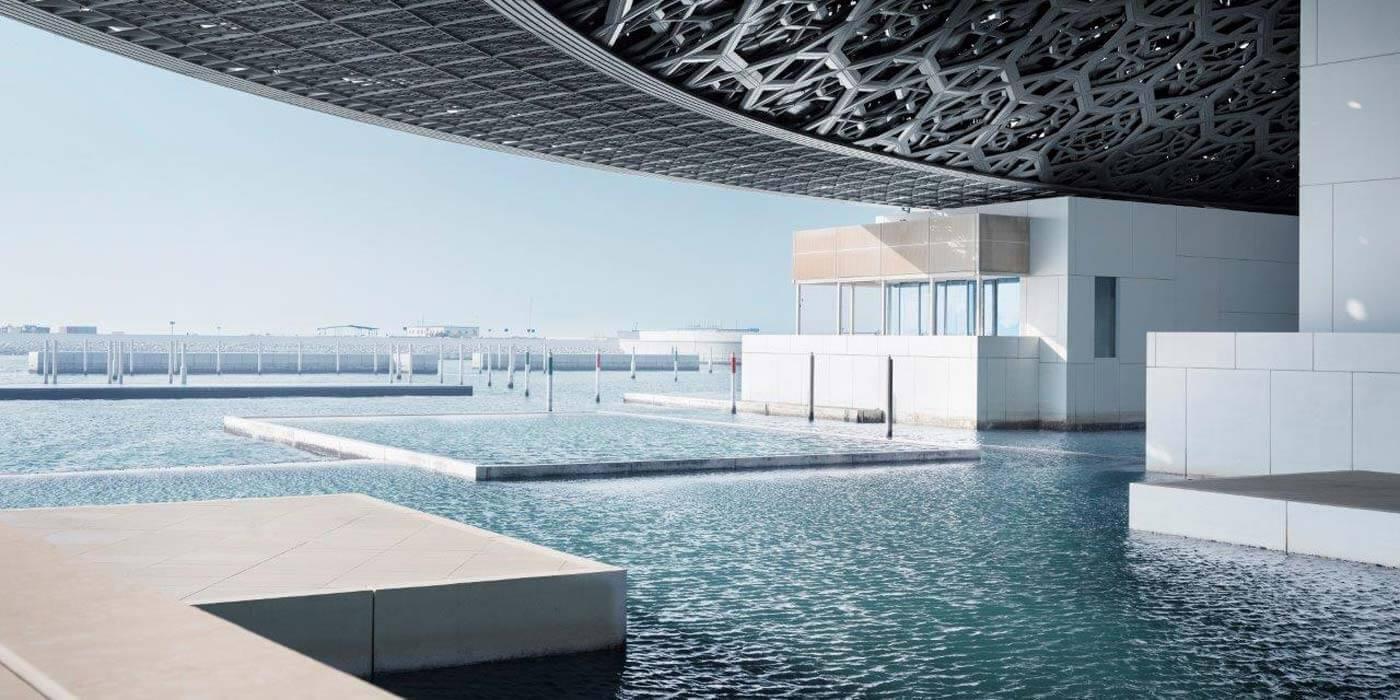 Take a look inside

Louvre Abu Dhabi’s story will begin in the Great Vestibule, where visitors are introduced to important themes such as maternity and funerary rituals. The galleries will be both chronological and thematic, and subdivided into 12 chapters. Displays include works from the earliest empires, including the first figurative representations, such as the Bactrian Princess created in Central Asia at the end of the third millennium BCE, funerary practices of ancient Egypt illustrated by a set sarcophagi of Princess Henuttawy, and the creation of new economies with a Decadrachm coin of Syracuse signed by the artist Euainetos.

A gallery dedicated to universal religions will feature sacred texts. The artistic exchanges on the trading routes during the Medieval and Modern periods are brought to the fore through an important number of ceramic works. Between Asia and the Mediterranean and then between Europe and America, guests will appreciate how the world’s horizon gradually expanded. A set of screens from the Japanese Namban demonstrate the dialogue between the Far East and Europe. In a section about Modernity are Edouard Manet’s (1832–1883) ‘The Gypsy’, Paul Gauguin’s (1848–1903) ‘Children Wrestling’, Piet Mondrian’s (1872–1944) ‘Composition with Blue, Red, Yellow and Black’. In the galleries, important artworks on loan from 13 leading museums in France will be presented. On show will be a monumental work by the artist Ai Weiwei (1957) and his questioning of globalisation.

Louvre Abu Dhabi’s first site-specific works installed in the outdoor areas by contemporary artists interact with the spirit of the museum and the fabric of the architecture. American artist Jenny Holzer (1950) has created three engraved stone walls named ‘For Louvre Abu Dhabi’ (2017). These cite important historical texts from Ibn Khaldun’s Muqaddimah, the Mesopotamian bilingual (Akkadian / Sumerian) Creation Myth tablet, and the 1588 annotated edition of Michel de Montaigne’s Les Essais. Italian artist ‘Giuseppe Penone’ (1947) has produced several works specifically for Louvre Abu Dhabi. ‘Leaves of Light’ (2017) is a vast bronze tree with mirrors placed in its branches to reflect the ‘rain of light’. ‘Propagation’ (2017) is a wall of porcelain tiles that depict hand-drawn concentric circles originating from the fingerprint of Sheikh Zayed, the UAE’s founding father. It was produced in collaboration with the workshops of Sèvres – Cité de la céramique in France. 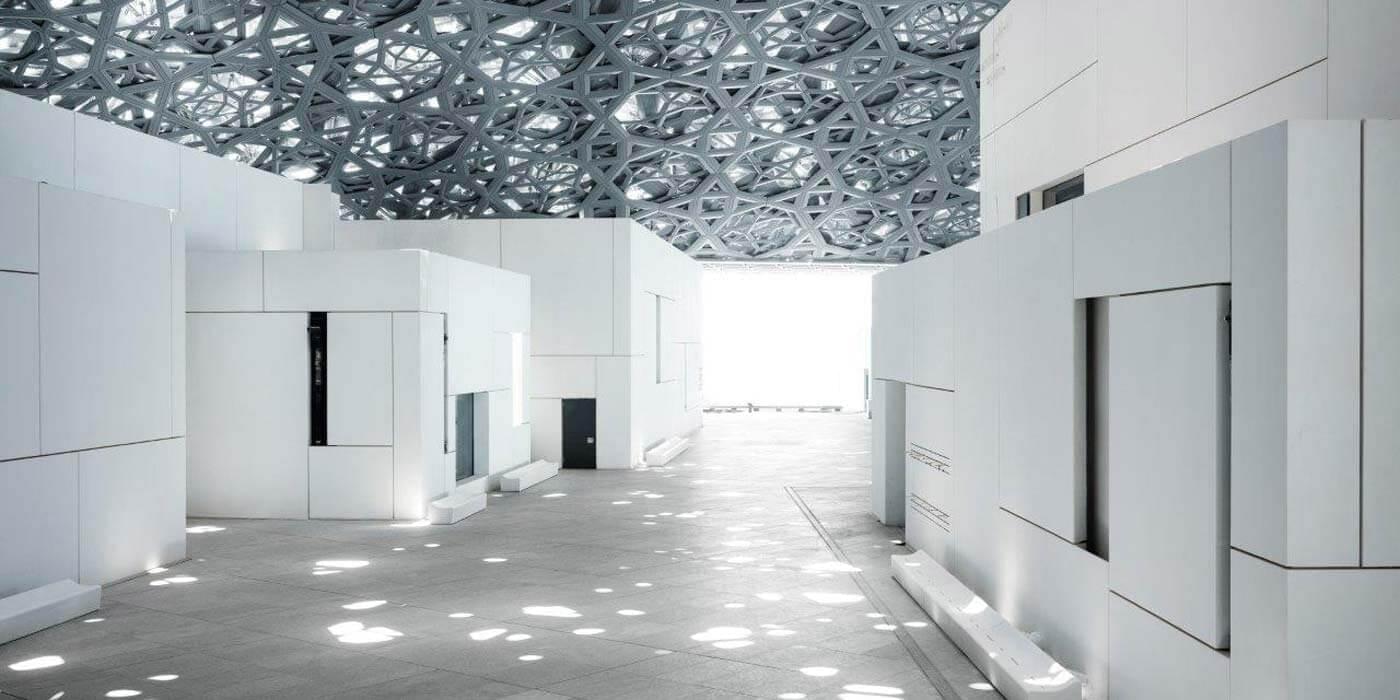 A museum for everyone

The inaugural special exhibition, From One Louvre to Another: Opening a Museum for Everyone, opens on 21 December 2017, and traces the history of Musée du Louvre in Paris. Divided into three sections, the exhibition will look at the royal collections at Versailles under King Louis XIV, followed by the residency of the Academy and Salons in this palace for artists, and conclude with the creation of the modern Musée du Louvre. It will feature approximately 145 significant paintings, sculptures, decorative arts and other pieces from the collections of Musée du Louvre and Château de Versailles.

The intergovernmental agreement includes the loan of the Musée du Louvre’s name for 30 years and 6 months, temporary exhibitions for 15 years, and loans of artworks for 10 years.

Tickets for the museum will cost 60 AED for general admission and 30 AED for ages between 13 and 22, as well as UAE education professionals. Free entry will apply to members of the museum’s loyalty programme, children under 13 years, ICOM or ICOMOS members, journalists, and visitors with special needs (referred to visitors with determination in the UAE) as well as their companion.

How buying art can help you make a mark on conservation