We ask the experts – cruise specialists from a collection of Australia’s finest Virtuoso member agencies – to recommend their favourite European river cruise destinations.

A Virtuoso luxury travel advisor that specialises in cruising will provide unbiased advice and the expertise to match you with the best ship and the itinerary that suits you.

Best for: A quintessential European river cruise with a musical legacy.

Although Strauss might have us thinking the most famous of Europe’s rivers is blue, the Danube is actually closer to brown in colour. The river courses through 10 countries, flowing some 2,860 kilometres from the foothills of the Alps in the Black Forest to the Black Sea in Romania. The Upper and Middle Danube is one of the most popular destinations for first-time cruisers, usually stretching from Passau or Regensburg (home to one of the oldest restaurants in the world) to Budapest, the ‘Paris of Eastern Europe’. Along the way, scenery ranges from quaint riverside towns to majestic cities; Linz, Melk and Bratislava are highlights known for their history, culture and architecture. Lovers of music will want to linger in Vienna, with its echoes of Beethoven, Brahms, Mozart and the Strausses.

David Brandon suggests an itinerary such as Tauck’s 12-day Blue Danube, which includes a pre-cruise stay in Prague, “unmissable and a highlight in itself … Tauck offers a ‘beyond the rope’ tour of Strahov Monastery’s Baroque library, which is absolutely stunning,” he adds.

The lower Danube between Budapest and Bucharest is less travelled, but just as alluring, sailing through the Iron Gates, the deepest and narrowest section of the river. Anthony Goldman suggests Tauck’s Black Sea to Budapest voyage: “[This] is an area of the river that is rich with history and culture … you cannot go past a trip to Peles Castle, the former residence of the Romanian royal family.” 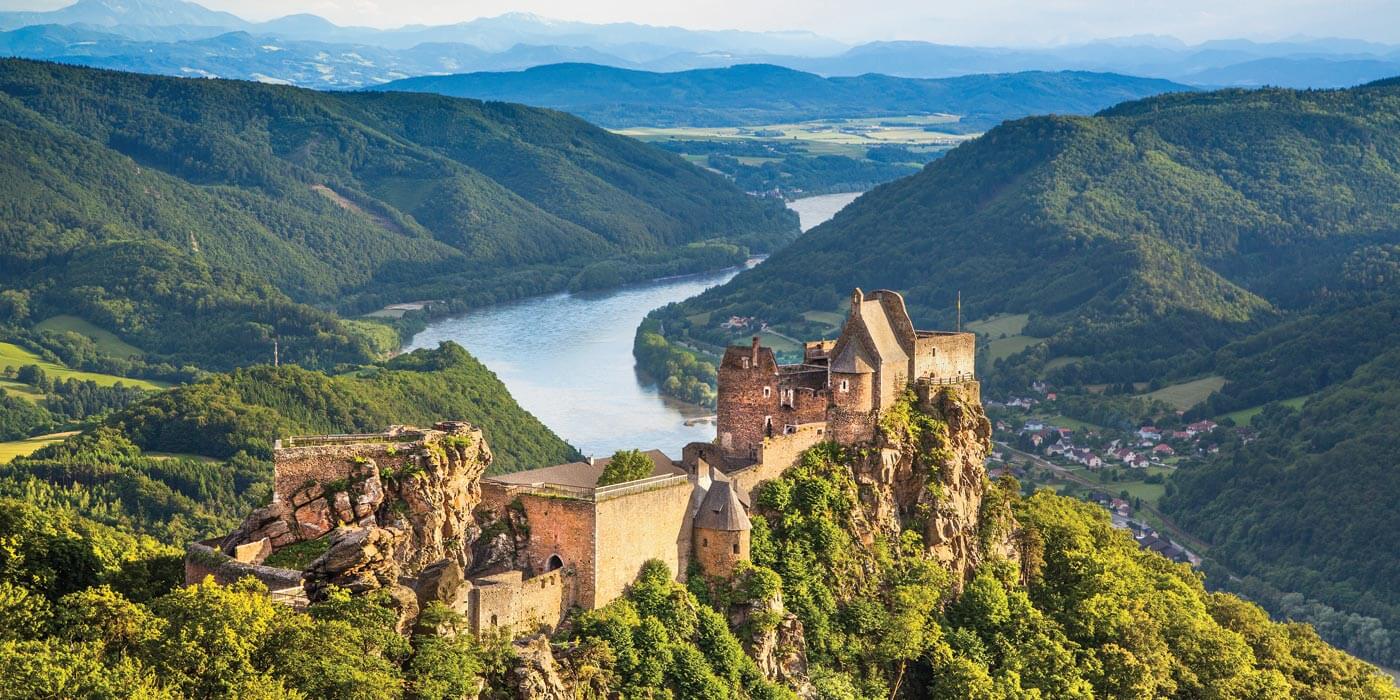 Best for: A romantic voyage studded with fairytale castles and vineyard-covered gorges.

To set sail along Old Father Rhine is to journey through the highlights of Western Europe, from international Basel (the navigable limit near the river’s source in the Swiss Alps) to the canals of Amsterdam. Skirt the border between Germany and France, home to the pretty medieval centre of Strasbourg, and voyage through the Rhine Valley, a region that boasts the highest density of castles in Europe. Between Bingen and Koblenz, barely five kilometres passes without seeing another magnificent castle towering above the river. With so many wonders this close together, the Rhine is an ideal river to explore by bicycle. On a recent Uniworld Rhine journey, Mandy Dwyer used the ship’s bikes to “meander through small towns, discover quaint cafes and chat to locals”.

Jo Gostin recommends Crystal’s Jewels of the Rhine 14-day itinerary between Amsterdam and Frankfurt, which “explores all the charming hillsides and romantic villages”, its highlights including riverside Cologne and Koblenz. “With Crystal, the cruise itself becomes a remarkable, luxurious experience,” Jo adds, emphasising the importance of both the destination and the vessel. Claudia Rossi Hudson also recommends Tauck on the Rhine, saying the cruise line “understands the difference between seeing the Rhine and enjoying it”. 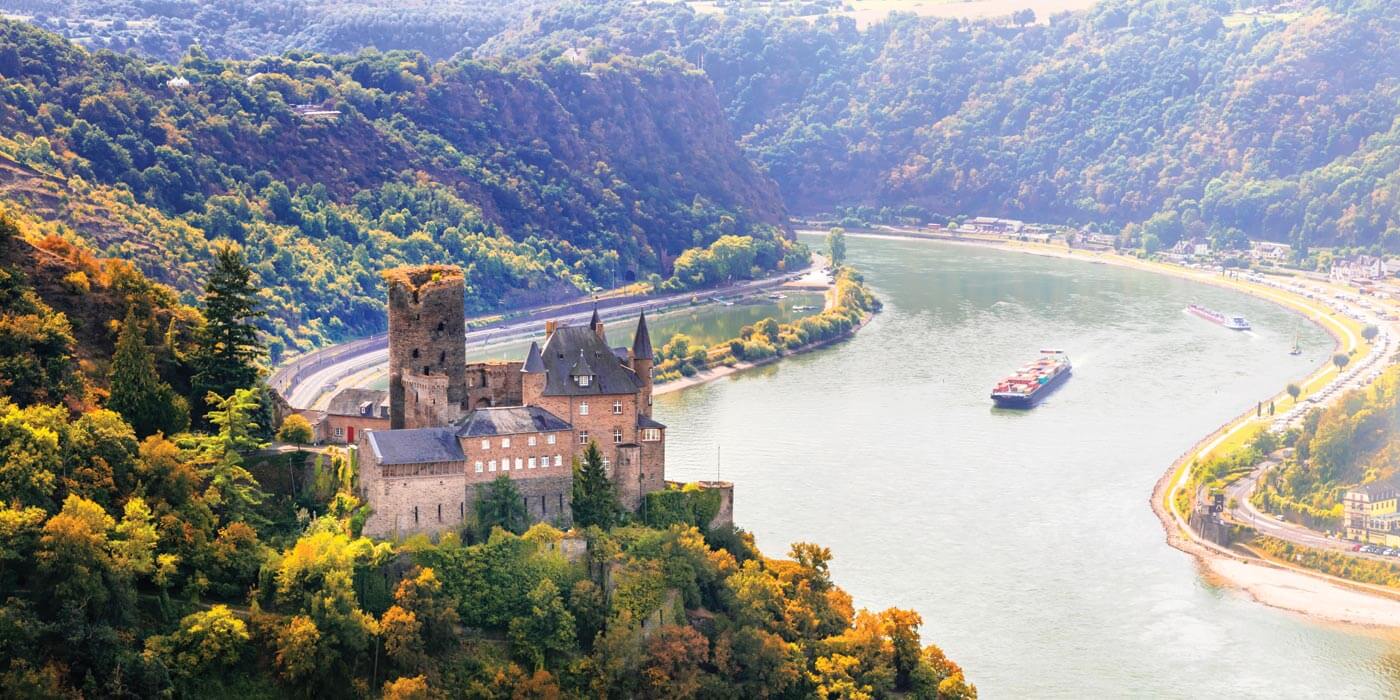 Best for:  Immersing yourself in history, culture and wine in a lesser-known, more intimate destination.

The longest of the Rhine’s tributaries has developed a reputation of its own in recent years. The Moselle, flowing 545 kilometres from the Vosges Mountains in France, meets Old Father Rhine at Koblenz in Germany. On its journey, it twists and turns through a deep valley, lined with the terraced vineyards of the Mosel Wine Region. Two of its major highlights are pretty Cochem, dominated by the Imperial Castle, and ancient Trier, the oldest city in Germany, with a rich Roman heritage.

Crystal launches its first in-depth exploration of the river in 2019. The 10-day Enchanting Moselle sails roundtrip from Amsterdam, incorporating a Rhine cruise between the Dutch capital and Koblenz. Jo Gostin says, “The Moselle is such a lovely choice for discerning and well-travelled individuals who want to explore locales off the beaten track.” She points to some of the anticipated highlights, including Beethoven’s hometown of Bonn, fashion-forward Düsseldorf and the Mosel Valley itself, “where rolling vineyards are spotted as far as the eye can see”. 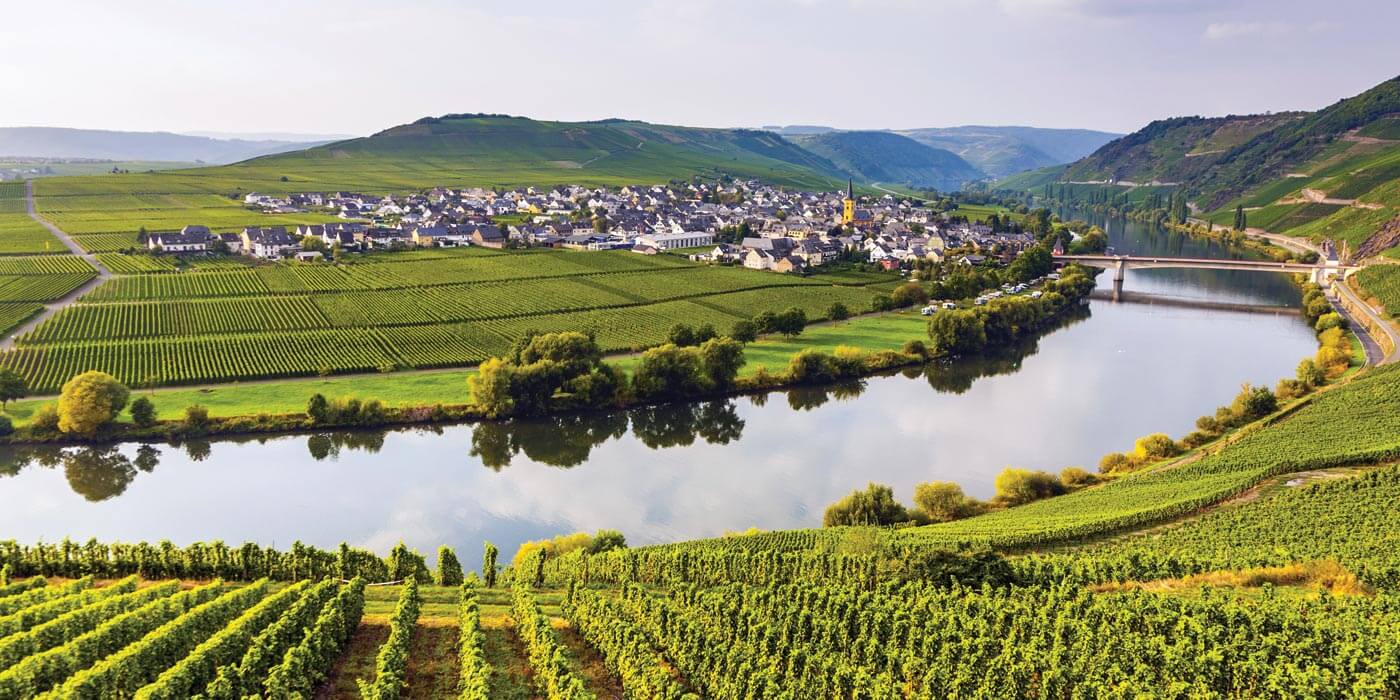 Best for: A voyage full of French charm that appeals to art-lovers and history-buffs alike.

The Seine is such a defining feature of Paris that the city is geographically and culturally divided into Rive Droite and Rive Gauche, or right and left banks. Venture beyond the capital, however, and you’ll discover a landscape that has inspired artists such as Van Gogh and a river that is a commercial lifeline, stretching to the English Channel at Honfleur. Nearly all itineraries along France’s longest navigable waterway travel roundtrip from Paris, visiting the likes of Monet’s gardens at Giverny and the WWI battlefields of the Somme. There are also plenty of gourmet delights, for this is the land of camembert, calvados and oysters.

Scenic’s eight- and 11-day Paris to Normandy roundtrips feature poignant tours of WWII’s D-Day landing beaches and a walk through Rouen, home of Joan of Arc. Giselle Pennington says this route is “always beautiful … with remarkable history and quaint townships”. She adds, “do not miss out on an opportunity to stay a few extra nights in Paris in order to explore this vibrant city, with its fantastic food, fashion and energy.” Claudia Rossi Hudson recommends Uniworld from personal experience: “Our private tour in Normandy of Château du Champ de Bataille with the owner’s garden designer/partner was quirky and fun. Uniworld’s Joie de Vivre has the contacts to make this happen.” 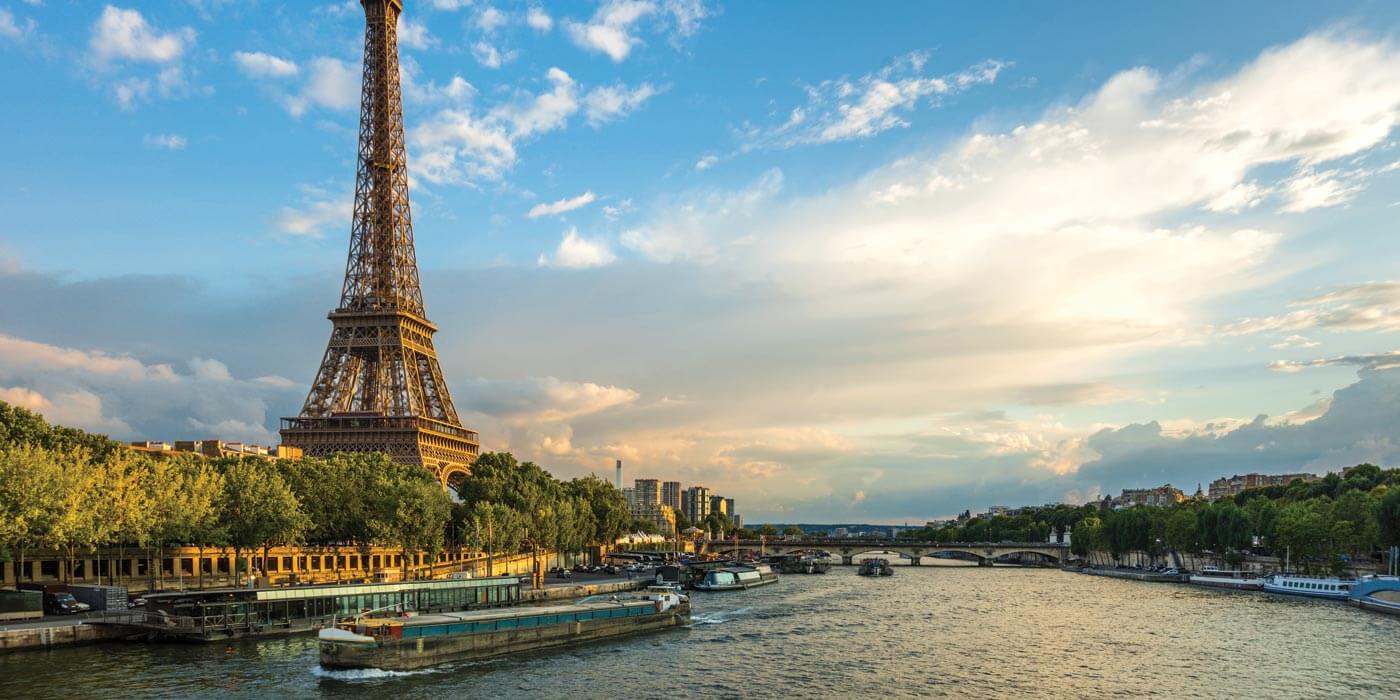 Best for: A gourmet journey dotted with lavender fields and Roman ruins.

From its source upstream from Lake Geneva, the Rhône is the only major river in Europe to flow directly into the Mediterranean, coursing 813 kilometres through countryside, vineyards and Provençal towns. Most journeys start or end in Lyon, the culinary capital of France, where the Rhône meets the Saône (flowing from Burgundy) and continues south to Avignon, Arles and the wildlife-rich marshland of the Camargue, known for its cowboys, pink flamingos, black bulls and white horses. A voyage typically features fine dining, wine tastings and a stop in Arles to soak up the light that inspired one of Van Gogh’s most productive periods.

Carissa Johnson says Tauck’s 10-day Savoring France, which includes a pre-cruise sojourn in Paris, offers an ideal exploration of this beautiful river. “This is a relaxing way to travel and access smaller towns, with the benefit of a tour director, two cruise directors and specialised guides in each location,” she explains. Unique experiences include a pastry class at Le Cordon Bleu Paris, a Provençal lunch at a Camargue ranch, wine tastings in Beaujolais and Châteauneuf-du-Pape and a Tauck Exclusive evening at a duke’s castle.” 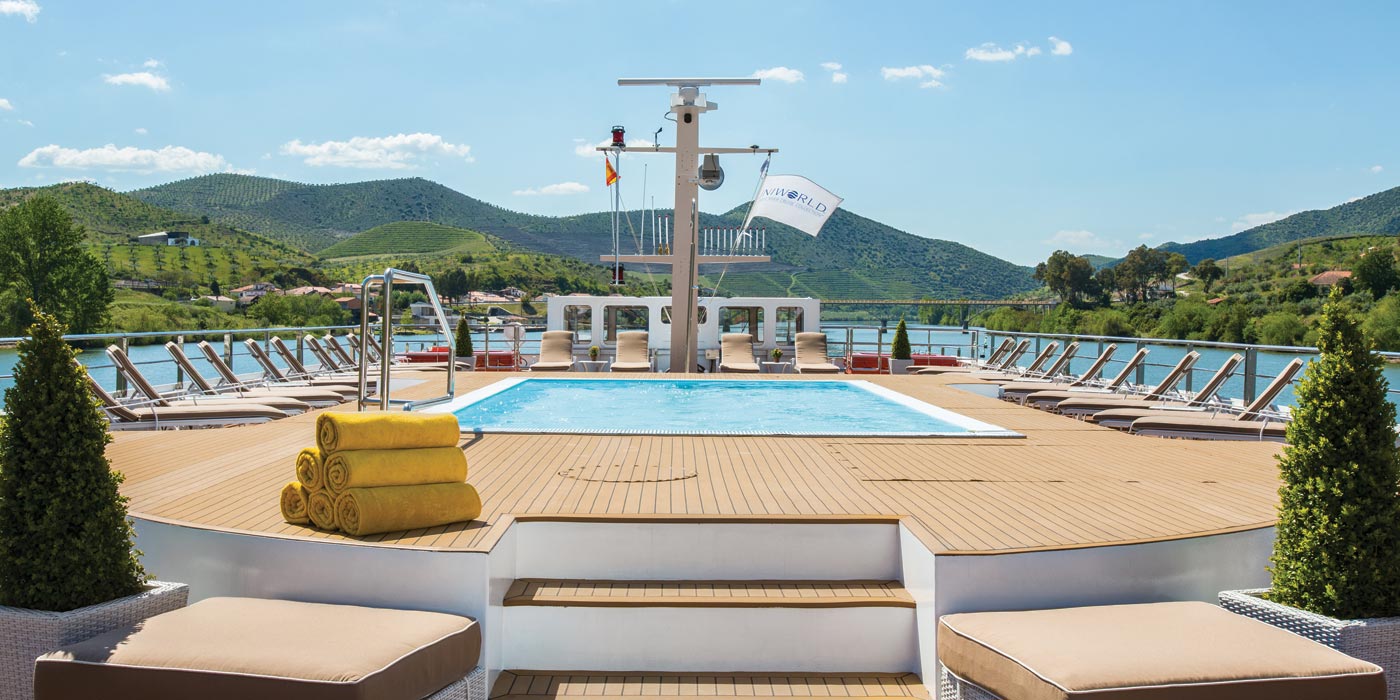 Best for: A sun-drenched cultural and gastronomic discovery of Portugal.

Although this picturesque river has its source in Spain, most voyages sail roundtrip from Porto on the Atlantic Coast, the second-largest city in Portugal and the centre of the port-wine trade. Along the way, it meanders through the Douro Valley and its UNESCO World Heritage-listed wine region, home to majestic castles, groves of almonds and olives and vineyard-set quintas that produce the finest port. By evening, savour the country’s simple but flavourful cuisine and the rhythm of fado. Many ships will travel as far as Vega de Terrón, just across the border in Spain, for an unmissable full-day tour to a 13th-century university town, Salamanca.

Uniworld offers a selection of itineraries along the Douro, ranging from an eight-day Porto roundtrip to the 13-day Jewels of Spain, Portugal and The Douro River, featuring pre- and post-cruise stays that allow you to discover both Lisbon and Madrid in depth. Both Mandy Dwyer and David Brandon suggest a Douro voyage for those who have done a few river cruises already. “Portugal is such good value and this cruise travels through magnificent wineries … The history, food, scenery and culture of Portugal will not disappoint,” Mandy explains. 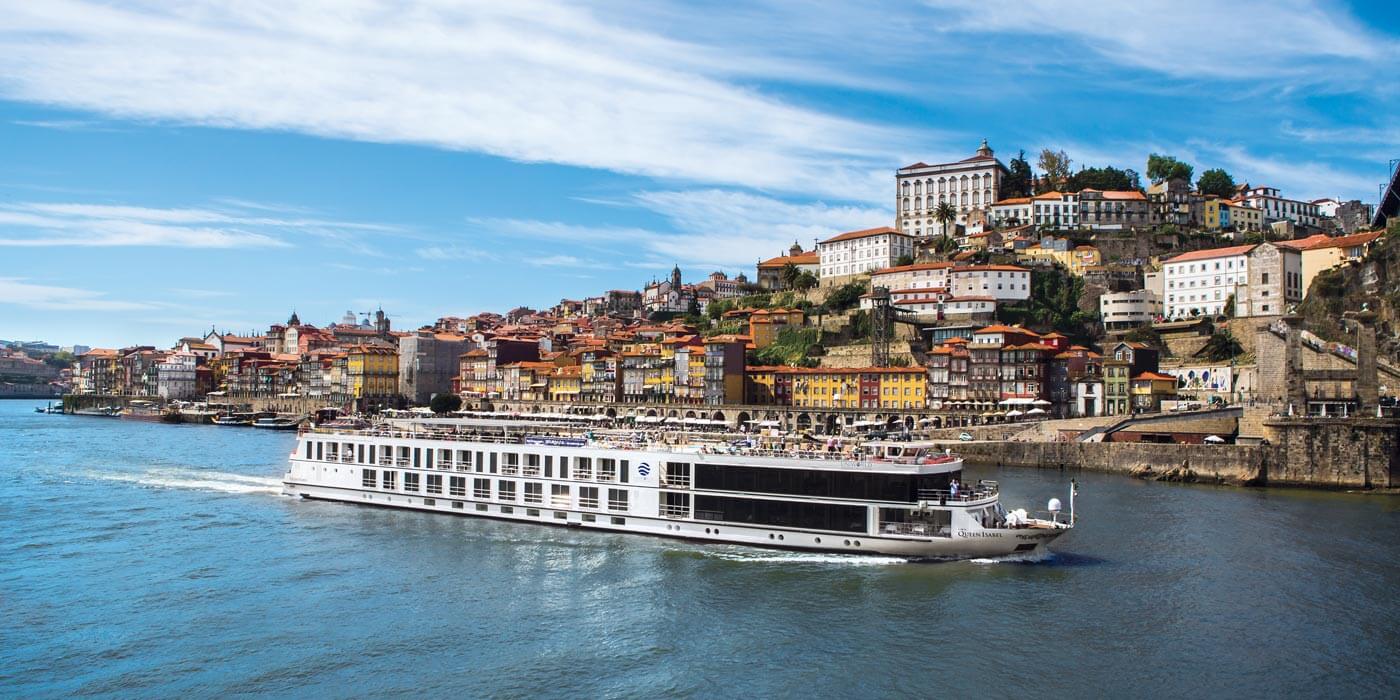 Best for: Delving into the fascinating history of Russia, from the days of the tsars to life after the Iron Curtain.

If you’ve ever wanted to experience Russia in depth, a river cruise between Moscow and St Petersburg is an ideal way to appreciate the culture of this beguiling nation. The journey explores a network of rivers, canals and lakes, including the Volga, Lake Onega, the Svir River, Lake Ladoga and the Neva River. Beyond the grand, imperial cities of Moscow and St Petersburg that bookend your cruise, soak up the more rustic ambience of the ‘Golden Ring’ cities and towns, such as Uglich, with its magnificent Church of St Dmitry on the Blood, and the UNESCO World Heritage-listed centre of Yaroslavl. Kizhi Island is home to one of the voyage’s most unusual sights: the all-wooden Church of Transfiguration (built without any nails), part of an open-air museum that preserves traditional Russian architecture.

Viking got its start in Russia, making its 13-day Waterways of the Tsars itinerary a must for those interested in this destination. This voyage begins in Moscow, with visits to the Kremlin and St Basil’s Cathedral, ending in magnificent St Petersburg, hailed as the Venice of the North. The recreated Amber Room at the Catherine Palace is a must-see, as are the treasures of the Hermitage Museum. Phil Smethurst says that, while there isn’t a huge focus on food and wine, travellers should “be prepared for an intensive look at the amazing architecture and the way of life of the Russian people”. 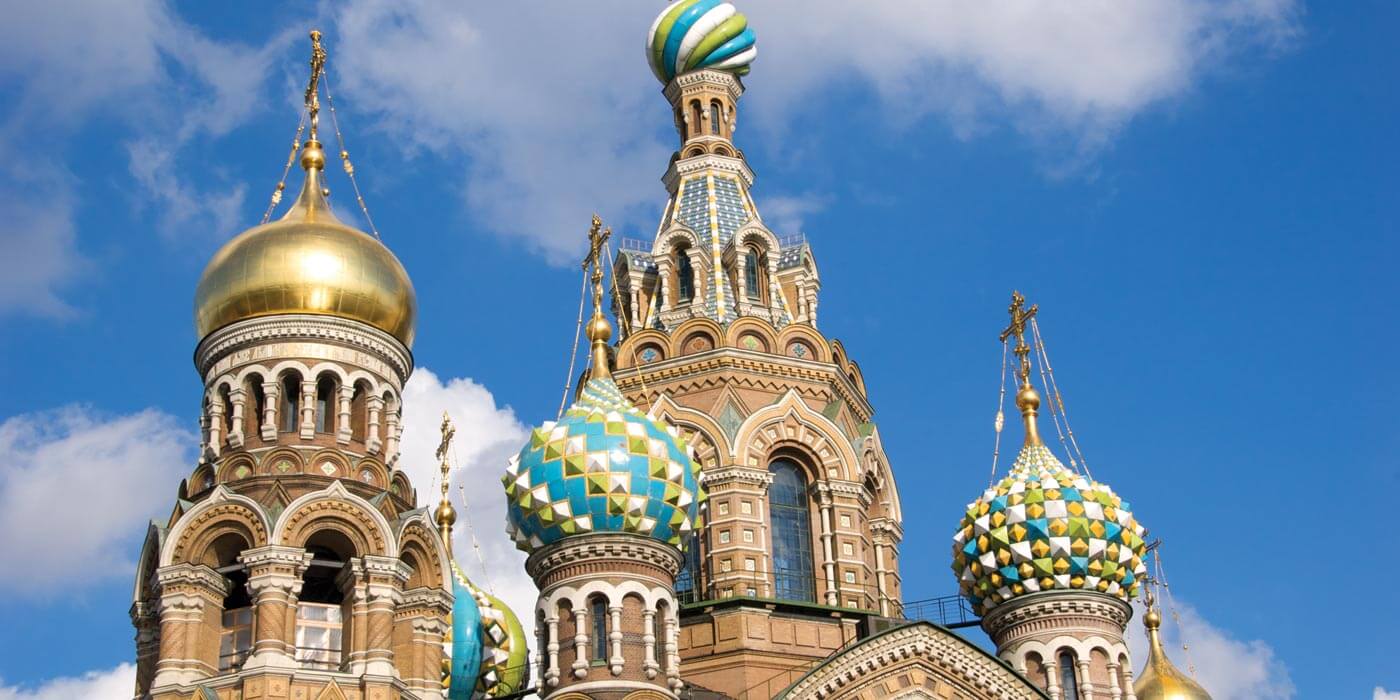 This article originally appeared in volume 31 of Signature Luxury Travel & Style magazine and was written in partnership with Virtuoso. To subscribe to the latest issue, click here. To read more about Virtuoso’s expert travel advisors, click here.