5 of the best French ski resorts

5 of the best French ski resorts

Winter in the French Alps is a time for thrilling ski runs, chic chalets and, of course, après-ski. Amelia Hungerford heads to the slopes to discover the best five-star French ski resorts.

BEST FOR: Seeing and being seen with fine dining and even finer hotels.

THE VIBE: Unabashed luxury with a touch of vintage glam. Courchevel has long been defined by its reputation for glitz and glamour. It’s arguably the best-known of the eight ski resorts that make up Les Trois Vallées, the largest linked ski area in the world, and it’s certainly the most lavish. Stroll through the fairy light-adorned streets for some designer retail therapy in the highest village, known simply as Courchevel. Rediscover the spirit of old Haute-Savoie in rustic Courchevel Le Praz (1300), and seek serenity at the futuristic glass-and-wood Aquamotion sports and wellness centre just below Courchevel Moriond (1650).

MUST-DO: Savour Courchevel’s artistic reputation with the ‘Art at the Top’ exhibition, held throughout the winter season, or immerse yourself in the kitchen of boutique Relais & Châteaux hotel, Le Chabichou, with a Michelin-starred cooking lesson. Other celestial delights include Pierre Gagnaire pour Les Airelles, Yannick Alleno’s Le 1947 inside LVMH’s Cheval Blanc Courchevel and Jean-Rémi Caillon’s Le Kintessence in Le K2 Palace; Courchevel has eight restaurants with 13 Michelin stars between them.

TOP SUITES: Of the 47 hotels spread over its four main villages in the 2016-17 season, 18 boasted five stars. That’s before you even consider the incredible chalets and apartments available for rent. There are only 24 hotels that have been honoured with France’s above-five-star Palace Distinction, and three of them are here: Les Airelles, Le K2 Palace and Cheval Blanc.

WHERE IS IT? In the Tarentaise Valley, a three-hour drive from both Geneva and Lyon International Airports, or brace yourself for arrival by plane or helicopter at Courchevel Altiport, the highest in Europe with one of the world’s shortest runways at 537 metres.

THE FIGURES: There are 150 kilometres of runs for your skiing pleasure, with a majority (57 per cent) catering for beginners on green and blue runs, and 10 per cent best suited to advanced thrill-seekers. 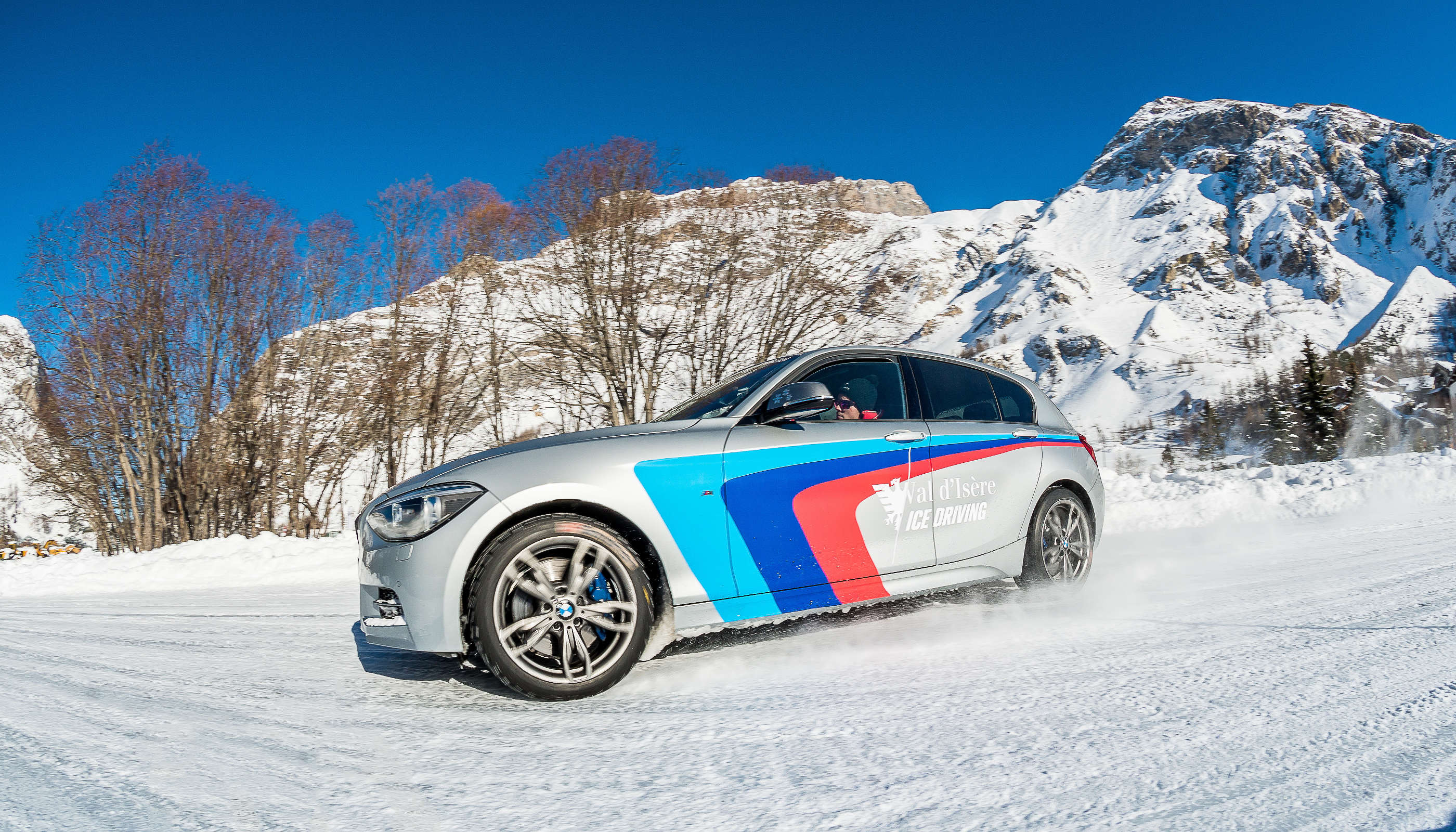 BEST FOR: On-the-slopes adventures with all the five-star après trimmings.

THE VIBE: Don’t let its 17th-century baroque church, stone chalets and quaint farms fool you; this picturesque mountain village is home to one of the most legendary steeps in the skiing world, Face de Bellevarde, or simply La Face. High altitude, two glaciers (shared with fellow Espace Killy resort, Tignes) and a large proportion of runs for intermediate and advanced riders makes it a snow-sure choice for experienced skiers looking for refinement.

MUST DO: Spin out with a BMW ice driving experience in La Daille and get a taste for the pumping après scene at the original La Folie Douce, a mix of nightclub, cabaret and fabulous food. Learn the secrets of one of France’s best pâtissiers with a pastry-making course in the laboratory of Patrick Chevallot. Music-lovers can time their visit with Classicaval, a celebration of melody and harmony in two parts (January and March) taking place within the 17th-century church, Saint Bernard de Menthon.

TOP SUITES: Choose from six five-star hotels, including Hôtel Christiana, an institution since 1949 with its traditional decor and elegant charm.

WHERE IS IT? Drive two hours and 45 minutes from both Lyon and Geneva into the Tarentaise Valley.

THE FIGURES: Espace Killy (Val and Tignes) features 153 runs over 300 kilometres. Nearly 70 per cent of its runs are for intermediates (blue and red), with another 17 per cent for experts (black). Beginners will get a boost with plans for the development of the Solaise area already in full swing. 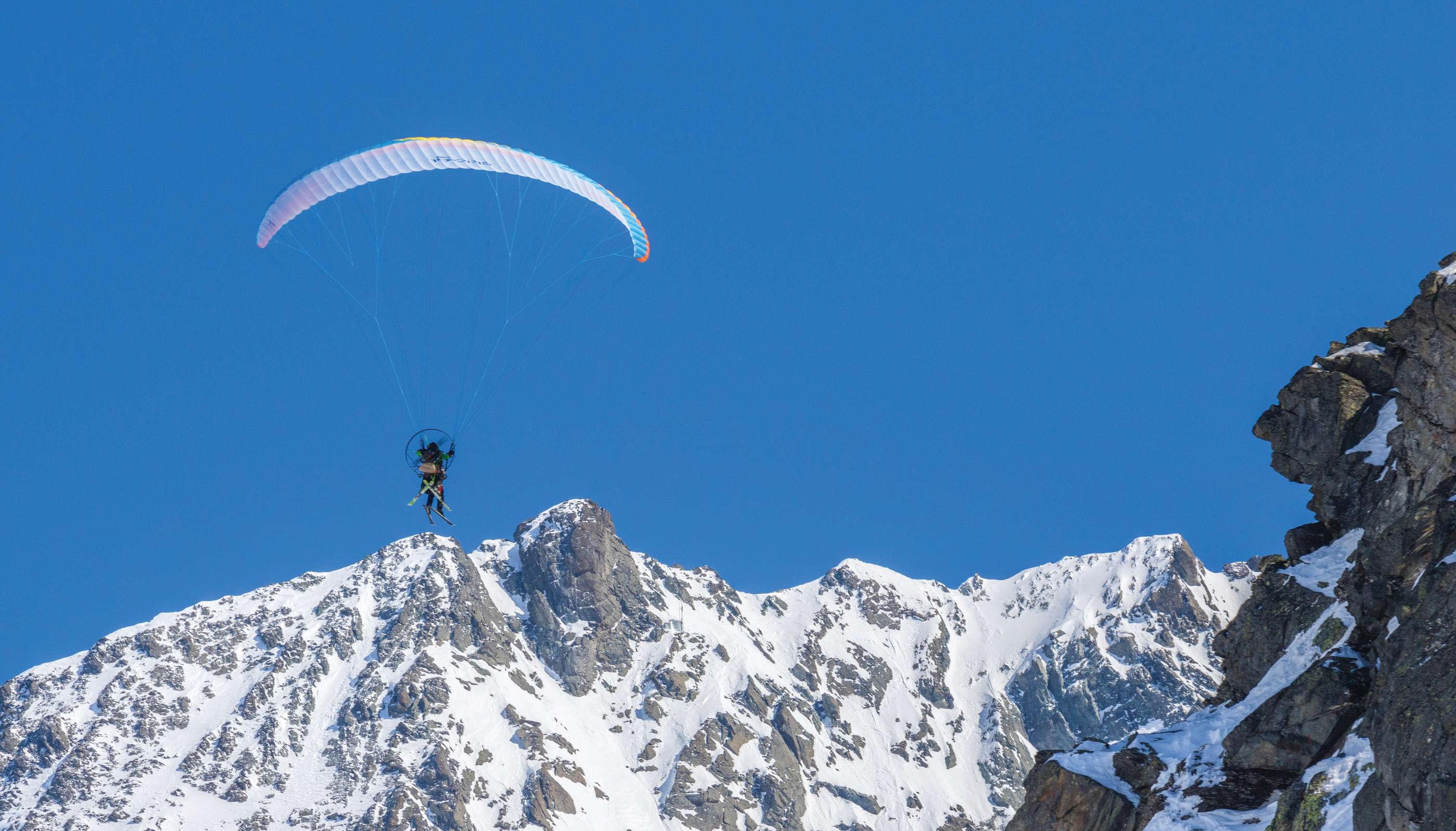 BEST FOR: Thrill-seekers who want to feel on top of the world at Europe’s highest resort.

THE VIBE: Cosmopolitan, playful and dynamic, not to mention the winner of the title of World’s Best Resort at the World Ski Awards in 2013, 2014 and 2016. Like Courchevel, ‘Val Tho’ is part of Les Trois Vallées’ super-sized area, offering a lively and laidback alternative to all-out glamour. Off the slopes, you’ll find a quirky array of experiences guaranteed to give you an adrenaline rush, and cuisine from Michelin-starred chefs when you’re ready to come back down to Earth.

MUST DO: Après-ski kicks off from 2.30pm at La Folie Douce, then takes a gourmet turn at local institutions such as Koh-I Nor Hotel, the south-facing terrace of Altapura or in the Mongolian yurt of Chalet de la Marine. Get your thrills drifting through the mountains on a paragliding or paramotor adventure, or fly between runs at Orelle and Val Tho on the 1300-metre Tyrolienne, the highest zipline in the world. After that, it’s time to take the plunge diving below the ice of Lac du Lou, or slow down with a snowshoe-yoga combo.

TOP SUITES: Choose from the four five-star hotels with ski-in, ski-out access: Altapura, Hotel Fitz Roy, Hotel Koh-I Nor and Hotel Pashmina. For something different, though, spend a night in Pashmina’s Igloo-Pod Experience, a geodesic tent for two on the hotel’s rooftop.

WHERE IS IT? A three-hour drive from the international airports of both Geneva and Lyon.

THE FIGURES: The delights of Les Trois Vallées are on your doorstep with 318 runs and 167 lifts spread across the world’s largest interconnected ski area. More than 85 per cent of its terrain is situated above 1800 metres, making it a perfect choice for spring skiing.

WHEN TO GO FOR SNOW: From its lofty perch at an altitude of 2300 metres, Val Thorens is the highest point in Les Trois Vallées, well equipped to offer brilliant riding conditions through a long, snow-sure season from 18 November 2017 to 8 May 2018. 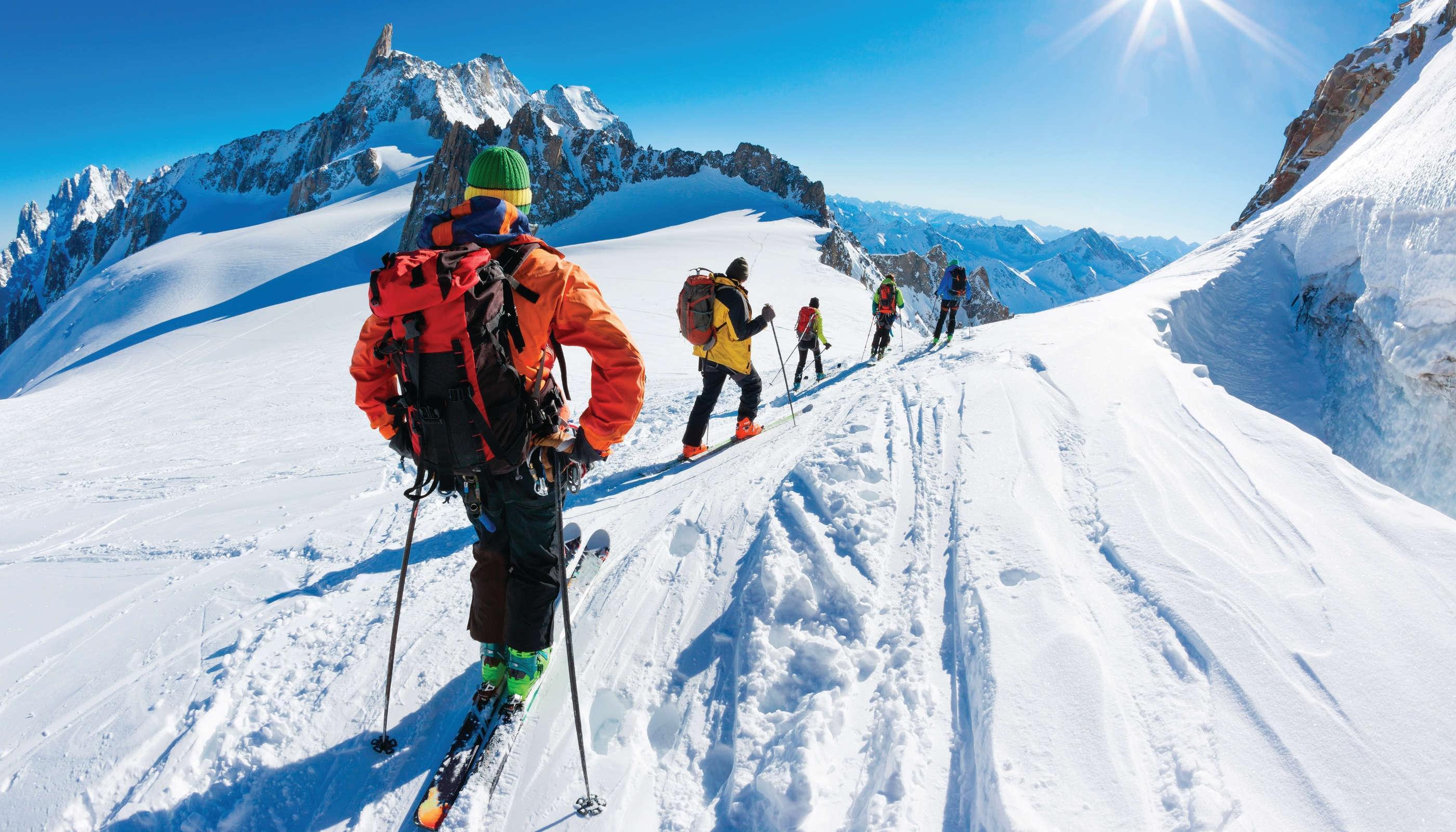 BEST FOR: Natural experiences that let you feel the majesty of the Alps.

THE VIBE: A mountaineering spirit seems to pervade Cham’ and its legendary landscape. Look up at the imposing face of Mont Blanc, 4810 metres above sea level, while you stroll the chalet-lined village during a shopping break or on your way to a gastronomic dinner.

MUST DO: Take the cable car up to jagged Aiguille du Midi (Needle of Noon), one of the Chamonix Valley’s most recognisable silhouettes, and take ‘A Step into the Void’ on a glass skywalk suspended 1035 metres in the air. A rack railway carries you up to Montenvers and a view over the Mer de Glace (Sea of Ice), France’s largest glacier at seven kilometres long. Admire the view from the panoramic terrace and savour Savoyard classics in the Restaurant du Montenvers inside the Terminal Neige – Refuge, recently done up by Maisons & Hotels Sibuet.

TOP SUITES: Luxury accommodation takes a historic turn in Chamonix. Hôtel Mont-Blanc, with its white façade and blue shutters, has been a favourite with well-heeled riders since opening in 1849, while Auberge du Bois Prin is an intimate enclave of just 10 rooms. Hôtel Le Hameau Albert 1er has been run by the Maillet-Carrier family since 1903 and features Pierre Maillet’s celebrated two-Michelin-starred restaurant.

WHERE IS IT? Chamonix is one hour’s drive from Geneva or Lyon, and two hours from Milan. Regular trains are also available from Paris, Lyon and Geneva.

THE FIGURES: With four main high-altitude ski areas, and six ski areas nestled in the valley, Chamonix’s terrain is varied enough to cater for all. Tour La Vallée Blanche with a professional guide and cruise down Europe’s longest off-piste track, descending 22 kilometres down a glacier. Like Megève, Chamonix is part of the Mont-Blanc Natural Resort, crossing three countries.

WHEN TO GO FOR SNOW: Generally speaking, between 16 December 2017 and 1 May 2018, though dates vary among the different ski areas. 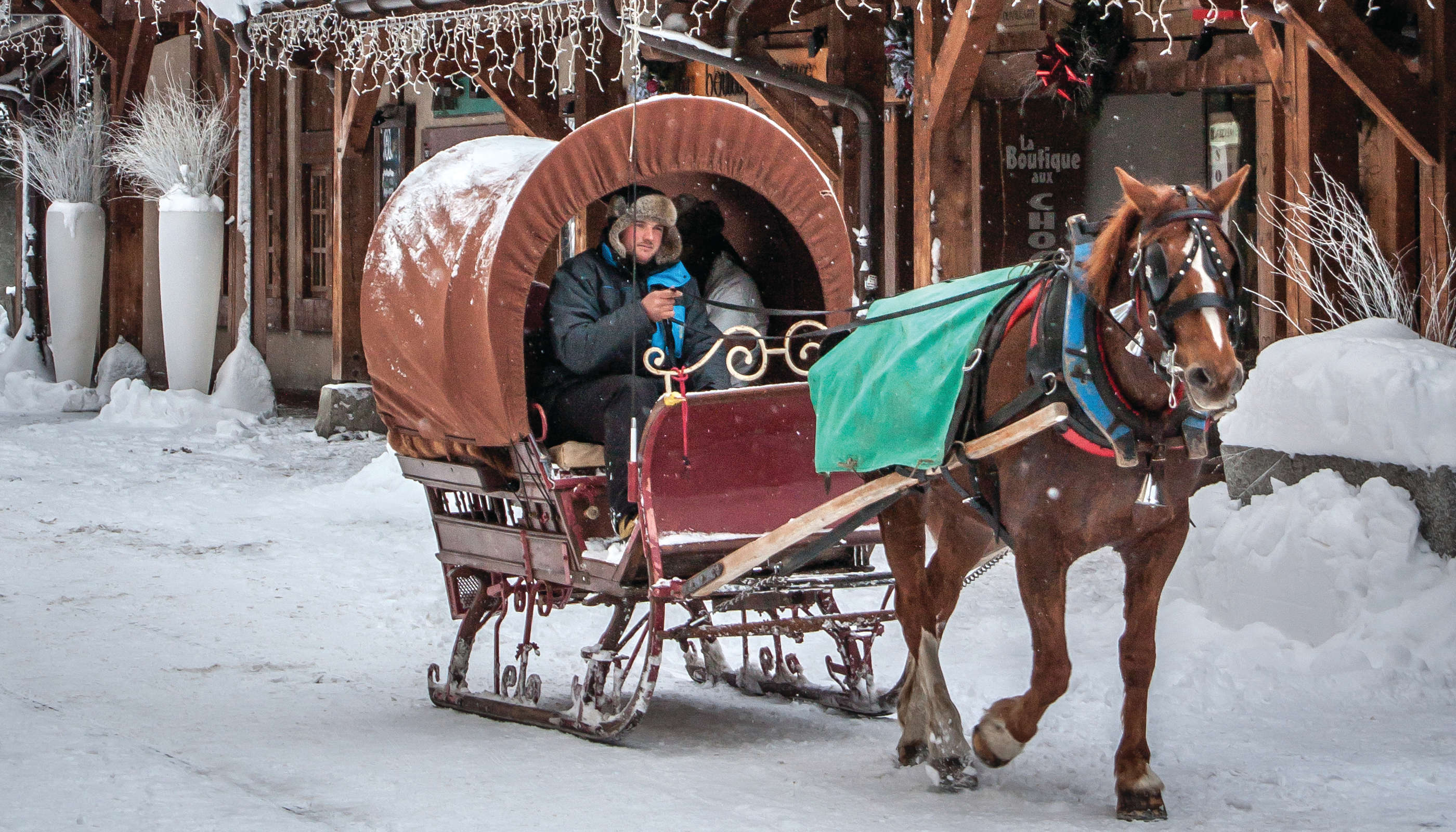 BEST FOR: A magical, romantic Christmas at the foot of Mont Blanc.

THE VIBE: A pretty Alpine village – complete with wooden chalets straight out of a fairytale – that just happens to be surrounded by excellent skiing. The winter festivities kick off with the lighting of the emblematic Christmas tree on 9 December (it stands all through the season), with 5000 people gathering each year for the grand moment.

MUST DO: A horse-drawn sleigh is the most picturesque way to see the village and go dashing through the snow in style. Go for a snowshoe walk and spend an evening in an igloo with the ‘Apérigloo’ experience, and be sure to take your dining up a notch at Flocons de Sel, Emmanuel Renaut’s three-Michelin-starred gastronomic haven inside the eponymous five-star boutique hotel.

TOP SUITES:: Be among the first to stay in the new 55-room Four Seasons Hotel Megève, opened 15 December 2017, as the brand’s first retreat in the European mountains. Expect two-Michelin-starred cuisine at Julien Gatillon’s Le 1920 (in a new home), and a Japanese concept dining experience.

WHERE IS IT? Perched at an altitude of 1113 metres, a one-hour drive from Geneva within the Mont Blanc massif.

THE FIGURES: There are 235 trails over 400 kilometres, plus snow parks, a new three-kilometre toboggan run and four Nordic ski areas, but if that’s not enough you can use the Mont Blanc Unlimited Pass to access three countries and 998 kilometres of terrain.