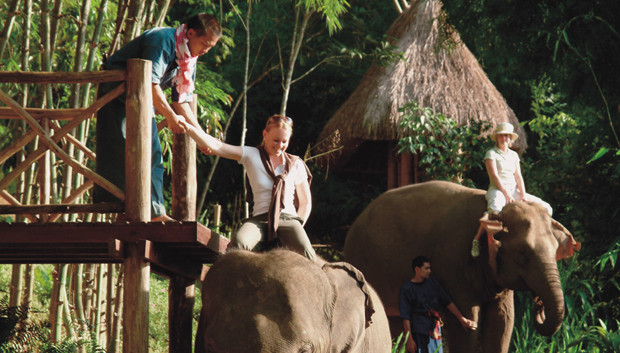 Elephant polo and other pursuits

C. James Dale discovers another side to Thailand while glamping in Chiang Saen in the Golden Triangle.

The original version of this story was published on March 7, 2012 in the Globe and Mail.

The closest I’ve come to playing polo is wearing the shirts. Yet here I am in the middle of a scrubby patch of grass in northern Thailand, helmet on head, stick in hand, waiting for a chance to score. Someone shoots the ball my way. I lean over, swing, and thwack! It rolls through a maze of mallets and animal legs and dribbles past the posts. One nil. The crowd goes… well, the crowd cheers politely. My teammates and I congratulate each other. Then I give credit where credit is due: to the roughly two-tonne elephant I’m sitting on and her mahout (or keeper).

Elephant polo, which sounds like a bastard child of colonialism, is the last thing I imagined myself doing on this trip, or even in this life. My match on this hot day in February capped off a weekend of firsts that included bathing with these gentle giants, tearing around a Burmese border town in a tuk-tuk, and downing shots of cobra whisky from Laos. And to think things started out so simply. 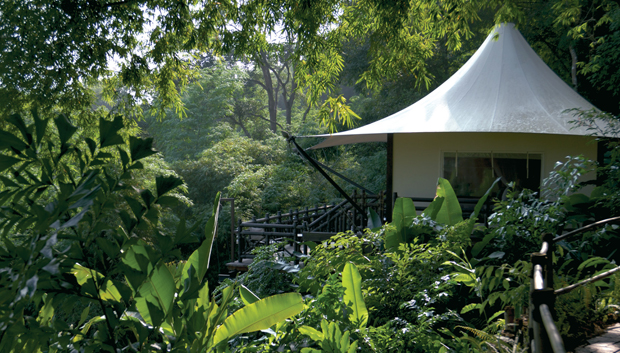 “Sawadee ka, welcome,” Kookkai and Beau say in unison when we arrive at the pier for the Four Seasons Tented Camp Golden Triangle. My wife and I are a little groggy after the 12-hour journey from Tokyo, but excited to be in this storied part of the world, where the borders of Thailand, Myanmar (Burma), and Laos meet, where farmers and various hill tribes once harvested the world’s largest supply of opium and heroin. The poppies are largely gone now, at least in Thai territory, replaced by tea and tobacco, coffee and pineapples.

We board a long-tail boat and speed down the cappuccino-coloured Ruak River, floating in a watery no man’s land that divides two countries, with the hills of a third in the distance. Rounding a bend, the first of the camp’s 15 tents appears up ahead, sitting serenely on a ridge and framed by bamboo. Once onshore, Kookkai leads us up a steep set of stairs.

“We apologize there’s no gym,” she says over her shoulder. “We will keep you walking though.”

No joke. Over cool, lemon grass-infused drinks, the staff outline the packed itinerary: a day trip to markets and temples in northern Thailand, Myanmar, and Laos; a morning spent riding elephants; and an afternoon at the camp’s open-air spa to banish any aches and pains.

But first, sunset cocktails. After resting in our luxurious Asian-design-meets-African-safari tent – with its views of Myanmar’s southeastern flank – we head to the bar for a drink, where we meet Susan and Chris Portner of Toronto, Canada, and quickly find out what brought them here.

“I have this obsession with elephants,” Susan confesses. “They are just my favourite.”

“I’ll never get my wife out of here,” Chris jokingly groans.

Spending time with elephants is the main reason people come to this secluded spot. Thais have relied on the animals for centuries to help them succeed at war and work, but a ban on logging in the late 1980s left thousands of mahouts without a way to feed their hungry charges. The Four Seasons and another hotel support the Golden Triangle Asian Elephant Foundation, a conservation group that provides a living for mahouts who would otherwise take their animals to urban areas to beg or work in entertainment. Now, the foundation’s roughly 30 elephants spend their days digesting thousands of pounds of sugar cane, bamboo, and bananas, along with lumbering through the jungle with tourists on their backs. 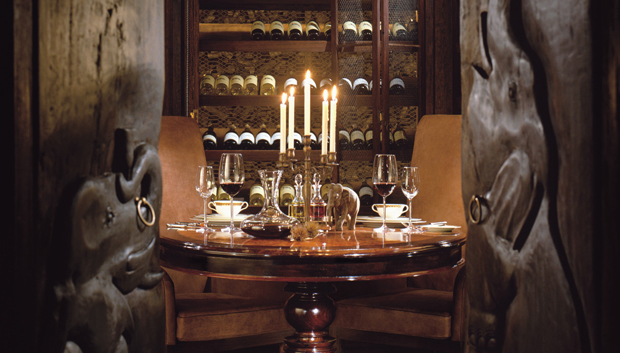 Before we get up close and personal with the pachyderms (for polo and other pursuits), we decide to visit the neighbours. A cool morning finds us motoring along the Mekong River to the Thai town of Chiang Saen, where our guide, Somkid, takes us to the local market. Outside, vendors sell barbecued fish and deep-fried chicken heads. Inside, tables are loaded with everything from lettuce and tomatoes to fresh rice noodles and meat. A woman sits crouched in one corner selling live frogs, bound into bunches of 10 by a thin piece of bamboo that’s woven through their legs. Next to her, someone hawks ant eggs.

“What do you do with those,” I ask Somkid, gesturing to what looks like a pile of tapioca.

“Sometimes you make a sauce,” he replies. “Make it a bit spicy or sour or sweet, and just mix the eggs inside, uncooked.”

The lunch we eat on the drive to Myanmar seems tame by comparison – sandwiches and vegetable fried rice. Fresh from a blessing by a monk at the Wat Chedi Luang, a 14th-century Buddhist temple, we’ve crossed the border and are now silently cheering on our tuk-tuk driver as he wills his sputtering, three-wheeled contraption uphill to the Tachilek Shwedagon Pagoda.

“This is a replica of the golden pagoda in Yangon,” Somkid tells us as we walk sock-footed around the 32-metre structure, built for the faithful who are unable to make the 1,100-kilometre trip to the former capital. Rubber trees dot the surrounding slopes. On the streets below, people navigate a bustling market on the hunt for CDs, DVDs, clothing, bags, jewelry, and much more, the vast majority of the products knock-offs from China.

“Even the liquor is fake,” Somkid warns us.

Happy as we were to have seen a snapshot of Myanmar, we were happier to get back to our tent in the jungle, where our days began at dawn watching a curtain of mist rise to reveal a scene of bucolic splendor as the free-jazz soundtrack of birds, bugs and snorting, trumpeting elephants played in the background. Most guests rely on superlatives and hyperbole to describe their time here: beautiful, gorgeous, once-in-a-lifetime. Our experience wasn’t any different. It was thrilling to amble through the forest atop the elephants, beings only God, nature, or George Lucas could have created. They stopped every so often to snake their trunks up trees to snag succulent leaves or snap off a branch. “Pai, pai,” the mahouts muttered, urging them forward. 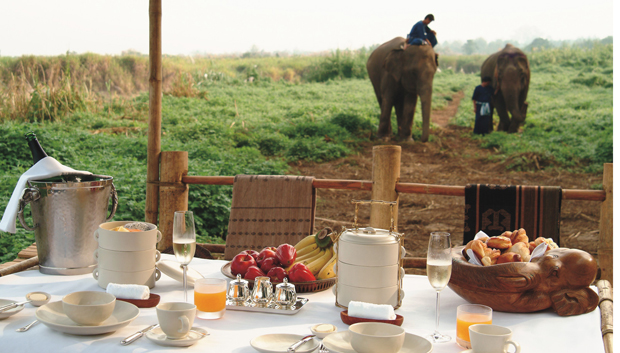 So slow and languid are their movements that few guess they can actually run, which is why I’m surprised to find myself saddled to one of them, charging down a field after a small, white ball. We arranged the pickup game the night before after a round of Laotian cobra whisky shots – the snake still in the bottle, a scorpion in its mouth. A team of pros, led by millionaire Texas oilman Ed Story, played the first match of the morning. Then I took to the field with a ragtag bunch of amateurs that included a business consultant from Mexico, a model from the Netherlands, and a fashion photographer from London.

“I’m coming for you, Ed,” I shout toward the sidelines, seconds after I score. The euphoria soon wears off. When the final whistle blows, my team loses 2-1. Still, after dismounting, I hint I’ll be back in March to take part in the tournament marking Thailand’s Elephant Day. But Ed, a fierce competitor, dashes my dreams. “You did well,” he says in his southern drawl. “But you had the best elephant and the best mahout.”

I agree with him. How could I not – he sponsored the match. But between you and me, I’m confident I’ve uncovered a hidden talent, one that will surely spice up my résumé. At least around these parts. 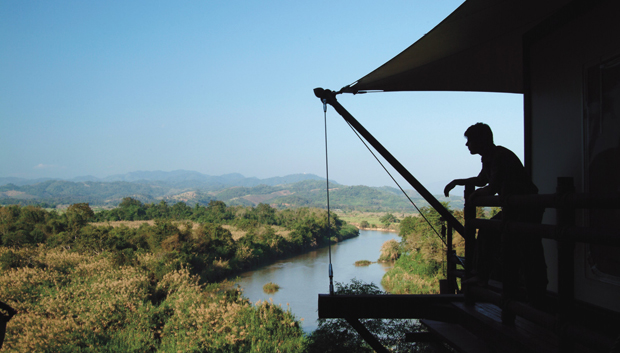 Here’s where (and how) you can bliss out virtually