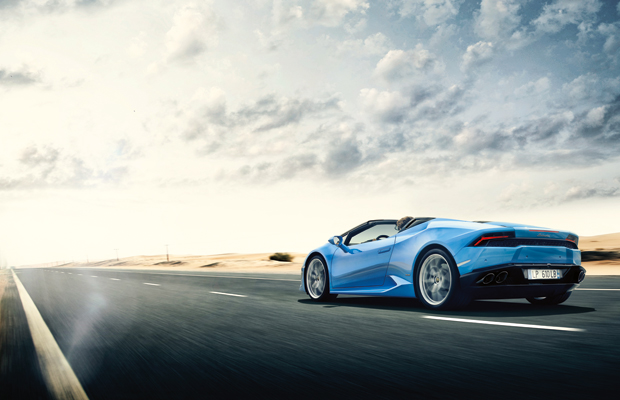 There’s an art to creating a convertible.

It isn’t a matter of simply removing the roof of a coupé; there are a bevy of factors to consider, from the structural integrity of the chassis sans top to the stowing of the roof so as not to affect the centre of gravity. 2015 has seen the creation of a handful of such well-crafted machines, from new iterations of the classics to entirely original models built for basking in the sun. 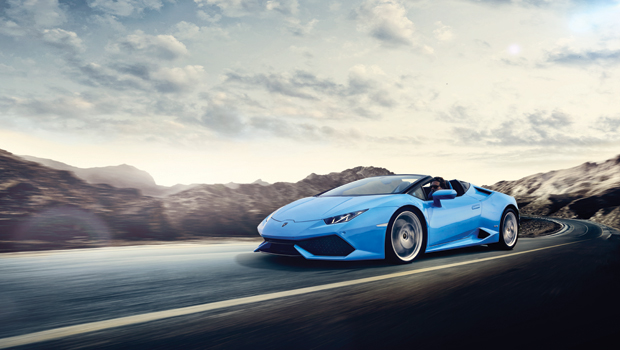 There’s an animalistic spirit within every supercar that bears the badge of the Raging Bull. Cut the top off and you’re able to set that roaring beast free. After all, when a car sounds as good as a Lamborghini Huracán, why wouldn’t you want to hear it? Unveiled at the Frankfurt International Motor Show in September, the all-new Spyder is a driving experience designed to thrill.

“The Huracán LP 610-4 Spyder is the next chapter in the success story of the naturally aspirated V10 Huracán, and continues a Lamborghini tradition of open air motoring,” says Stephan Winkelmann, President and CEO of Automobili Lamborghini. “Its predecessor, the Gallardo Spyder, was the best-selling open-top model in Lamborghini’s history: we expect the Huracán Spyder to exceed its predecessor in every way.”

In its transformation from coupé to convertible, the Huracán has been given a lightweight, electrohydraulic soft top, available in three colours: black, brown and red. It can open up in just 17 seconds, up to speeds of 50km/h. Automatic pop-up safety bars discreetly hide away when the roof is down, two movable rear fins enhance its streamlined aerodynamics and a composite construction of aluminium and carbon fibre combine for a lightweight yet rigid chassis.

Under the bonnet, the Spyder boasts all the same technical qualities as the Huracán Coupé, with a naturally aspirated 5.2-litre V10 engine producing 449kW. It accelerates from zero to 100km/h in 3.4 seconds, capable of reaching a top speed of 324km/h. The Spyder has also been endowed with the new features found in the 2016 Huracán model family, including ‘cylinder on demand’, ‘stop start’ and a new electronically controlled all-wheel-drive setup.

In Australia, get your Huracán LP 610-4 Spyder fix at Zagame Automotive in the heart of Melbourne. The Zagame family and their team are connoisseurs of Italy’s most exceptional vehicles, offering a first-class service that showcases the unbridled excitement of Lamborghini.

Since its global debut at Pebble Beach in 2014, Aston Martin’s fastest and fastest-accelerating production roadster has garnered acclaim as one of the marque’s finest open-top experiences. Matching the visceral thrill of the V12 Vantage S Coupe with the style of a cabriolet, this roadster features the latest six-litre V12 engine producing a top speed of 323km/h – and a magnificent sports soundtrack to complement its agile handling. Aston’s race car DNA is present in the Sportshift III seven-speed transmission. Maximising airflow to the V12 engine is a new grille, replacing the aluminium vanes with carbon fibre and mesh, a design inspired by the CC100 Speedster Concept. Customise yours with the Q by Aston Martin Collection, choosing from bold colours, carbon fibre and unique finishes to ensure your Vantage is truly one of a kind.

For the first time in 44 years, one of the most luxurious cars on the road will be available as a convertible. Produced between 1961 and 1971, the original S-Class Cabriolet was an icon, and its 21st-century descendent promises no less. Fitted with all of the accoutrements found within the S-Class family, the new Cabrio boasts a three-layer acoustic soft top and an electrically retractable cover in the luggage compartment. As part of its ambition to build the most comfortable convertible in the world, Mercedes-Benz has equipped its latest with an intelligent, automated climate control system. Options also include a system to reduce interior turbulence and the AIRSCARF neck-level heating system. The S 500 Cabriolet comes with a 4.6-litre V8 while its AMG version, the S 63 4MATIC Cabriolet, is equipped with a 5.5-litre V8 biturbo engine, capable of accelerating from zero to 100km/h in 3.9 seconds.

The 911 has been the definitive sports car for decades, matching high performance with form and function. In its latest incarnation, its distinctive exterior has been but gently modified, with newly refined headlights, door handles without recess covers and a newly designed boot cover with vertical louvres. Under the bonnet, it’s a rather different story. All Carreras have been endowed with new turbocharged engines, offering 272kW of power for the 911 Carrera and 309kW for the 911 Carrera S. This redesign offers a more powerful driving experience with the added benefit of lower fuel consumption. Improving on its signature blend of everyday comfort and track readiness, a new PASM (Porsche Active Suspension Management) chassis also lowers the ride height by 10mm.

Is this the most beautiful convertible ever made? Its Goodwood creators certainly believe it is the quietest. In creating the new Dawn, Rolls-Royce sought to build a “social” vehicle with a sunnier disposition than its ethereally named stable mates. While many convertibles favour the experience of the driver and front passenger, the rear is designed for occasional use rather than comfort. Dawn changes this with a design that is optimised for four adults.

“In the world of Rolls-Royce, day-to-day mathematical norms don’t always apply. That’s why I say in the case of the new Rolls-Royce Dawn, 2+2 does not equal 4,” says Giles Taylor, Director of Design. The fabric roof, lowering in 20 seconds in a “silent ballet”, not only offers supreme quiet but also an equally elegant appearance whether open or closed. Signature touches, including the sweep of wood panelling across the back deck, add to the luxury. Powered by a 420kW V12, producing a top speed of 250km/h, there is no compromise on performance, either.

This popular grand tourer has been refined and updated for 2015, making it more elegant and more efficient than ever before. The exterior has been sculpted to accentuate its sporting spirit, with a smaller radiator shell and more pronounced fenders, while a selection of three new paint colours opens up a range of customisation options. Inside, a refreshed small-diamond quilting pattern adorns the four seats. The driver controls have all been redesigned for a more ergonomic and contemporary feel. Ensuring connectivity on the road, Bentley has also made onboard Wi-Fi available. The 6.0-litre twin turbo W12 engine has been given a power and torque increase, from 423kW to 434kW and from 700Nm to 720Nm for a more thrilling high-performance drive with a variable displacement system to reduce fuel consumption.

Although the 488 GTB has only been around for a few months, Ferrari has already rolled out a version featuring its patented retractable hard top. This ingenious piece of engineering folds backwards in two overlapping sections, resting flush atop the engine, and is able to be deployed or retracted in 14 seconds. Additional developments come through the spaceframe chassis composed of 11 different aluminium alloys, a new turbo-charged 3.9-litre V8,  miraculous combination of greater downforce with less drag, and a throttle response time minimised to just 0.8 seconds for effortless handling. The 488 Spider accelerates from zero to 100km/h in three seconds flat, with a top speed of 325km/h – at that speed, the masterfully composed soundtrack is at its most lyrical. For passenger comfort, an electric glass rear wind stop can be adjusted to three different positions, whether the roof is up or down. In the world of entertainment, Marenello has also announced the Apple CarPlay system will be available across the Ferrari range, offering integrated iPhone functionality for messaging, maps and music. 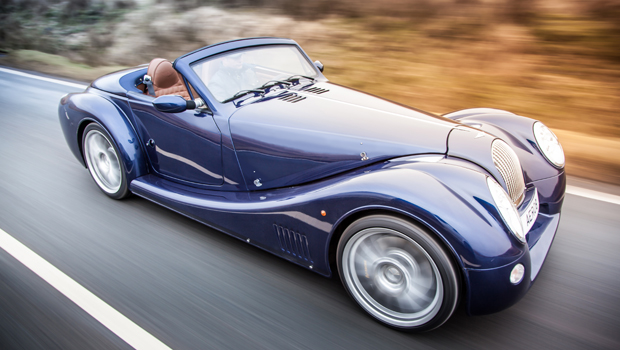 Combining classic British sports car aesthetics with class-leading performance is the hallmark of Morgan, and nowhere is this more obvious than in the fifth generation of its Aero 8. Making its debut at Geneva International Motor Show in March, 15 years after the first-generation Aero, the latest from the Malvern factory is a handmade celebration of open-top driving. The resculpted aluminium body recalls the 1960s in its long and low lines. Every aspect, from the new double-lined mohair soft top (a hard top is also available) to the box-woven carpets and leather trim in the interior, speaks to the luxury of a (not quite) bygone era of motoring. Structurally, changes to the aluminium chassis, new suspension and a new BMW limited slip differential offer a stiffer, more responsive drive, with a 4.8-litre V8 BMW engine producing 273kW. As with all of Morgan’s handbuilt cars, the newest generation of the Aero 8 offers an extensive list of options for full customisation. Zagame Automotive in Richmond, Victoria, is the only place in Australia where you can place an order for a new Morgan.

Jaguar has reinvented its definitive sports-car experience with the addition of all-wheel drive and manual transmission options for 2016. The F-Type family in Australia has grown from six to 12 derivatives, with five convertible options. The new AWD maintains the sportiness of the F-Type’s rear-wheel drive through Intelligent Driveline Dynamics, a system that delivers ‘torque on demand’. The six-speed manual, on the other hand, has been designed with purists in mind, offering a visceral driving experience. The AWD is available only on the top-of-the-line F-Type R in Australia, while the RWD manual transmission is an option for the F-Type. 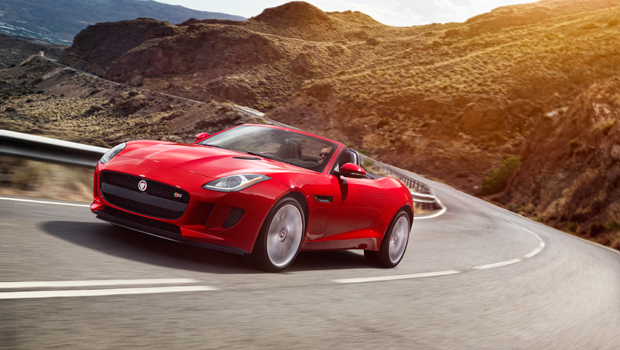 The new Rolls-Royce Wraith Kryptos Collection has a labyrint...

Aston Martin rebuilds James Bond’s DB5 with all the Goldfi...

Experience Alaska like never before on the all-new Ocean Victory

Watch: New Zealand will be waiting for you when this is all over