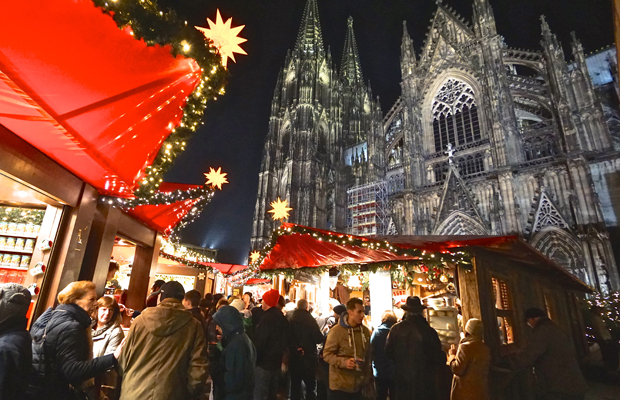 The Christmas markets of Germany: a cobblestone celebration

Jessica Braithwaite gets whisked away to a land where the air is cold but the wine is hot amid Germany’s traditional Christmas markets.

The Christmas markets of Germany are pockets of joy where you can sense the season and delight in the beauty of a winter Christmas. Treat yourself and everyone you know as you discover unique handmade gifts, one-of-a-kind artworks and delectable foods. But before we can go, we need to lower the temperature by about 30 degrees… the air is brisk, your hands are cold and you’re walking through the night in an unfamiliar town. Now cue the music.

First you notice the violin – floating on the icy air, warm and soothing against the brisk night. Slightly beneath that, a tuba dancing with an accordion. ‘Where is it coming from?’ You follow your ears as they lead you around a dark corner, the sounds growing louder as you walk. A turn down another unexpected alleyway and the sight you are greeted with is even more beautiful than the music that led you there: four musicians standing in the cold, passion painted on their faces as they perform arrangements worthy of an opera house stage.

A crowd has gathered. Night shoppers stare in amazement. They were drawn here, too. The notes bounce off the walls of the narrow laneway as the music lifts to a crescendo. A powerful climax then the notes fall to the ground. The song is over. A moment of drawn breaths before the crowd erupts into applause. Strangers turn to each other to remark on how good it was. Old men smile to themselves. Mothers give coins to children who run to put them in the open violin case that sits on the cobblestone street. And that right there – that’s the spirit of a winter Christmas in Germany.

Embracing the season with handcrafted luxury

It’s these spontaneous moments of harmony and togetherness that make Germany’s Christmas markets such a feel-good experience. Warmth oozes from the town squares and local parks, as they are transformed into picturesque places of celebration. Far from being put off by or whinging about the cold weather, the Germans own it. Shoppers don boots, beanies (and if you’re a shivering Australian like me, three pairs of pants) to step out into the night and soak up the season.

Robust foods keep hearts warm while a luxury retail experience ignites imaginations. Exquisite pieces are crafted before your eyes: intricate designs and one-off creations. Each gift has a story and the person who sells it is often the very person who made it. Children play on the bustling ice-skating rinks while old friends embrace and laugh, catching up on the happenings of the year that’s passed. Add to that some light snowflakes fluttering through the sky and you’re quite possibly stepping into one of the prettiest scenes in the world.

Though Christmas markets happen right across Europe, the German ones are among the oldest. In fact, Germans have been setting up open-air stalls to sell gifts in December since the late Middle Ages. In the far west, the string of cities comprising Cologne, Düsseldorf and Bonn are frequently cited as having some of the prettiest markets in the nation. Though open during the day, they truly come to life when the sun goes down. Trees are adorned with lights and ribbons and red baubles, glittering reflections of Christmas shimmer.

In Cologne, the monumental Gothic cathedral forms the backdrop to the markets beneath. Men in costume sell bratwurst, pretzels and potato pancakes with apple sauce. Others sell desserts that are equally as tempting: marzipan-laced puddings, gingerbread biscuits and waffles packed with strawberries, cream and chocolate sauce. Thank goodness it’s Christmas; the perfect time to sample anything you want and worry about the waistline in the new year. After all, that’s what New Year’s resolutions are for… (aren’t they?)

My advice… devise a Christmas markets eating plan. This ensures you can fit in every flavour. The last thing you want to do is stumble across the delicious waffle stand only to find you overdid it on the fried potatoes. That’s a terrible result. Always. Leave. Room. For. Waffles.

Warming up in Bonn

Just a 20-minute train ride from Cologne is the smaller, enchantingly quaint city of Bonn. The Christmas markets feel more local and the vibe is enriching. Families stop to watch carollers sing by the town steps. Women with prams exchange warm wishes while their young children run delightedly hand in hand through the maze of leisurely shoppers’ legs. The spirit of Christmas is in the air and a sip or two of glühwein only adds to the buzz. Glühwein is to German Christmas markets what sticky tape is to wrapping paper. Things just wouldn’t be right without it. The traditional hot wine is mixed with cinnamon, sugar orange and cloves to make a sweet yet spicy winter warmer.

As the night deepens, the glühwein glasses are recharged and the bands get louder. The jazz outfits playing at the bigger markets on weekends are as adept at busting out DJ Avicii covers as they are at the classic carols. When they launch into the traditional German favourites, sentimentality among the crowd is high. With voices raised and arms embracing, shoppers sway together as they proudly sing in unison. It’s a spectacular sight and you’ll probably want to be a part of it – so just do what I did… put your arm around a German and pretend you know the words.

Despite all the tastes, sights, vibes and sounds, the best thing about the German Christmas markets is that you can take a piece of them home with you. Your gifts will surely be the most unique thing placed under the tree that year and hopefully you do the right thing and spoil yourself too. 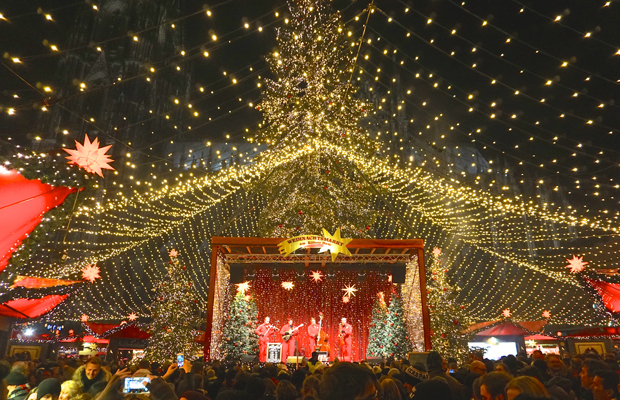 Oceania Cruises’ 2024 Collection is their grandest to date

Explore 3 continents on this boutique, all-inclusive Rivers of the World voyage in October 2024