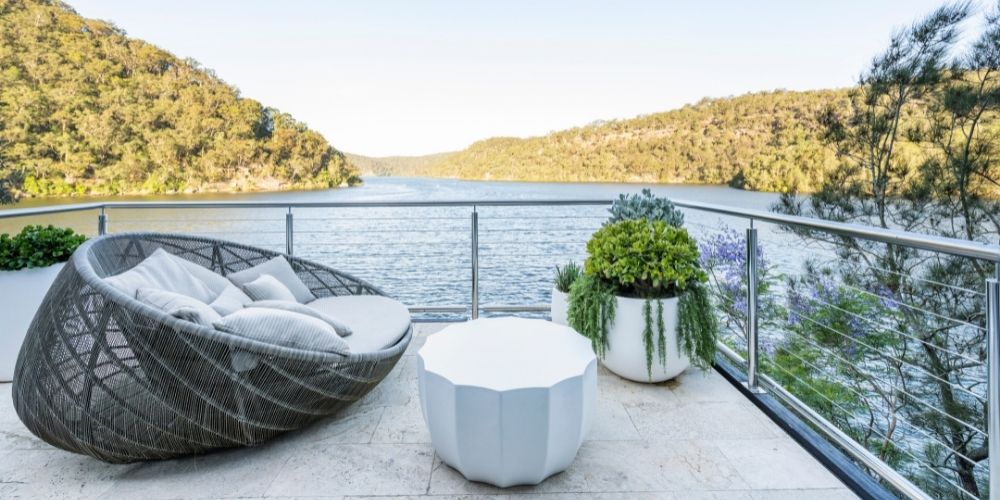 The Hawkesbury River skims Sydney’s perimeter from the foothills of the Blue Mountains and all the way to Broken Bay, near Pittwater. But it’s where the river meets Berowra Waters that travellers find the luxury Calabash Bay Lodge, fine dining and the priceless sense of rejuvenation thanks to surrounding native bush, weathered cliffs, and flowing waterways. The lodge is flanked by three national parks and can only be accessed by boat or seaplane adding to its appeal as in-the-know travellers flock here to restore their energy levels by being close to nature.

The river is steeped in Aboriginal history with the land adjacent to the Hawkesbury once occupied by the Darkinjung, Dharug, Garigal and Kuringgai peoples. They used the river as a source of food and a place for trade. In the languages of the traditional custodians the river is called Deerubben or Dyarubbin meaning ‘wide, deep water’.

It’s with a deep respect for traditional owners that Kim Ellis operates Calabash Bay Lodge (and its sister property Crane Lodge in Palm Beach). There are subtle nods to Kim’s enthusiasm for Aboriginal and Torres Strait Islander culture and heritage throughout the four bedroom property. In the Master King suite, guests will find a handwoven pendant mimicking a traditional fishing scoop from Koskela’s award-winning Ngalya exhibition in 2019. Ngalya is a Dharug word (Calabash’s local traditional language) meaning “together”, reflecting the partnership between this Australian furniture brand and Aboriginal and Torres Strait Islander weavers from six art centres. The lampshades were woven on each artist’s ancestral land using native fibres, including pandanus grass and bush string from the kurrajong tree.

Once here, guests can cruise to NSW’s only pearl farm where they’ll visit the ‘Shellar Door’. The experience involves a historical overview of oyster farming and pearling in Australia in an interactive theatre, where guests can learn the secretive process of how pearls are made. For those keen to witness the wonder of nature in action, guests can experience a boat tour to the oysters themselves and be the first to view a pearl as it’s brought up from the river and opened.

When an appetite is worked up, guests can head to Berowra Waters Inn. The modern Australian fine dining restaurant was reimagined by Pritzker Prize winner and Australian architect Glenn Murcutt. The restaurant serves an all Australian degustation sourced from local makers, growers and suppliers. Like Calabash Bay Lodge, you can only get here by the surrounding waterways, with the Inn’s private ferry conveying you dock to dock.

But, the real entertainment for guests is of course the great outdoors on the river with the use of a runaround boat for fishing and adventuring. Calabash guests can also discover nooks and crannies of the river by using the lodge’s double and single kayaks or stand up paddle boards. Or, catch your dinner with rods and crab pots available for those seeking the meditative benefits of fishing. Year round, swim from the private pontoon or take the boat for a spin to a nearby secluded beach at low tide.

Calabash guests can also opt to stay in, and soak up the surroundings, with an optional on-site chef. There are eight special dining locations in and around the lodge where the chef will serve up a five course lunch or dinner using local produce. The staff can also arrange yoga and meditation teachers to make the most of the lodge’s rooftop wellness studio. For true immersion, unwind with a hot stone or remedial massage by the waterfront to the sound of the lapping tides.

In winter months, families can warm by the open fireplace or snuggle up in one of the many hanging chairs or a hammock to watch the river flow by.

It’s little wonder that Calabash Bay Lodge is a favourite for those who know about the secret that is the Hawkesbury River. This really is one of the most luxurious stays on the Hawkesbury, if not Greater Sydney itself.

Why you need to try a Wild Luxury holiday

This article was produced with content supplied by Wild Luxury and is a Signature Luxury Travel & Style digital exclusive. Be the first to see more exclusive online content by subscribing to the enewsletter.